This profile won Profile of the Week the Second Week of December 2014.

Serena was a kind and generous woman, loved by all who knew her. She used many of the Indian medicinal remedies for curing ailments of her family and friends. While John was away during the Civil War, Serena remained on the old Ball home place at Cotile (now Hemphill) with her two small children. Her near neighbors were the Parker family. Several of the family remembered the Jayhawkers[1] chasing a young Parker boy through the woods, finally leaving him for dead. Serena rescued the young boy, took him to her house where she tried to nurse him. Serena's efforts were in vain, as the boy died. She built a coffin and buried him nearby, thus the beginning of the Ball Cemetery. Zoey Ball Gaspard remembered this story as well, as did Annie (Garland) Parker.

The Balls lived in Rapides and Vernon Parish all their lives. They are buried in the Ball Cemetery near Hot Wells (Rapides), Louisiana [2]. The Ball Cemetery is located near the old Ball home place where Serena lived during the war.

Is Serena your ancestor? Please don't go away!

ask our community of genealogists a question.
Sponsored Search by Ancestry.com
DNA Connections
It may be possible to confirm family relationships with Serena by comparing test results with other carriers of her mitochondrial DNA. However, there are no known mtDNA test-takers in her direct maternal line. It is likely that these autosomal DNA test-takers will share some percentage of DNA with Serena: 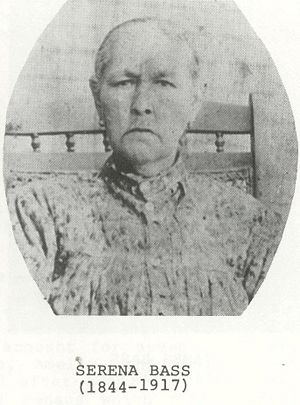 Categories: Profile of the Week Winners