Countess Elizabeth Bathory was a member of the aristocracy in Europe.

According to widespread misbelief, Elizabeth Báthory was one of the most notorious serial killers in history, supposedly murdering over 600 women in her castle during her lifetime. There is no evidence that she actually committed the crimes she allegedly did. It is more likely that the stories were made up by rival families. She was a widow of one of the most powerful and wealthy noblemen of Hungary, she managed enormous estates and was documented to have been very good to her people offering scholarships and running practically a hostpital in her castle. Her trial was not fair by the standards of her time (torturing witnesses, etc.) and it is widely believed that the case was to seize her assets.

According to Jensen (2012), Anna was the sister of Stephen Bathory, King of Poland, and her husband was a soldier. [4] 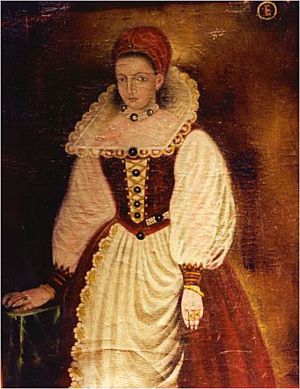 Dave McNally
Bathory-21 and Bathory-7 appear to represent the same person because: These are one-in-the-same and need to be merged.
posted Oct 06, 2015 by Dave McNally

Elizabeth is 26 degrees from Donald Howard, 18 degrees from Julia Howe and 9 degrees from Henry VIII of England on our single family tree. Login to find your connection.