John Batman was an Australian explorer he led an expedition which explored the Port Phillip Bay area on the Australian mainland with a view to establishing a new settlement there. He is best known for his role in the founding of the settlement on the Yarra River which became the city of Melbourne, eventual capital of the new Colony of Victoria

John Batman was an Australian explorer.

John Batman was born in 1801 at Rosehill , Parramatta his parents were William and Mary Batman,who came to Sydney in 1797 aboard the ship the Ganges they were both English. When John was 20 years old in 1821 he and brother Henry moved to Van Diemen's Land now known as Tasmania to settle on land in the north-east near Ben Lomond

John Batman in December 1825 captured the Bushranger , Matthew Brady, for which he was given an additional grant of land by the government. Brady had been wounded in the leg in a conflict with the authorities, but got away safely. Batman went out unarmed on his own in search of Brady, and found him. He saw a man limping in the bush near a shallow creek, and rushed forward to him. John Batman induced Brady to surrender. Brady was ill and suffering in much pain and gave himself up. Brady was sentenced to death

John Batman became a grazier in 1829 he helped in the capture of Tasmanian Aborigines He employed Aboriginal people in Sydney, New South Wales, for roving parties hunting Tasmanians. Between 1828 and 1830, Tasmanians in this region were shot or rounded up by bounty hunters like John Batman.

John Batman in September 1829 with the help of several "Sydney blacks" he brought to Tasmania, led an attack on an Aboriginal family group together numbering 60–70 men, women and children in the Ben Lomond district of north-east Tasmania. This has been called the "Ben Lomond massacre"[1]. Waiting until 11pm that night before attacking, he "…ordered the men to fire upon them..." as their 40-odd dogs raised the alarm and the Aboriginal people ran away into thick scrub, killing an estimated 15 people. The next morning, he left the place for his farm, with two badly wounded Tasmanian men, a woman and her two-year old boy, all of whom he captured. However, he "...found it impossible that the two former (the men) could walk, and after trying them by every means in my power, for some time, found I could not get them on I was obliged to shoot them." The captured woman, named Luggenemenener, was later sent to Campbell Town gaol and separated from her two-year old son, Rolepana, "...whom she had faced death to protect. Batman reported afterwards to British Colonial Secretary, John Burnett, in a letter of 7 September 1829, that he kept the child because he wanted "...to rear it...". Luggenemenener died on 21 March 1837 as an inmate at the Flinders Island settlement

Batman openly defied Governor Arthur-755 and [George Augustus] Robinson-15817 by refusing to hand over two Aboriginal boys in his employ: Rolepana (or Benny Ben Lomond) and Lurnerminer (John or Jack Allen), captured by Batman in 1828. He claimed the boys were there with the consent of their parents,....He also demonstrated a strong proprietorial interest in the boys, when he told Robinson they were 'as much his property as his farm and that he had as much right to keep them as the government'. Indeed Batman was convinced that the best plan was to leave the children with the colonists, who clothed and fed them at no expense to the government and raised them to become 'useful members of society'. In a series of letters to Governor Arthur, he 'pleaded hard for the retention of youths educated by settlers and devoted to their service

John Batman looked for land grants in the Western Port area in 1835, as a leading member of the Port Phillip Association he sailed for the mainland in the schooner Rebecca and explored much of Port Phillip.When he found the current site of central Melbourne, he noted in his diary of 8 June 1835, This will be the place for a village and declared the land Batmania

John Batman's Treaty negotiations with Kulin peoples took place in June 1835 on the banks of the Merri Creek in present-day Northcote , Batman did not visit the colonial camp that was later set up on the Yarra River Melbourne until November 1835. Batman negotiated a treaty now known as Batman's Treaty but also known as the Dutigulla Treaty, Dutigulla Deed, Melbourne Treaty or Melbourne Deed), with 7 (8[2]) tribal elders of the Kulin peoples, including Bebejern, 'King' of the Wurundjeri and father of William Barak-18, to rent their land on an annual basis for 40 blankets, 30 axes, 100 knives, 50 scissors, 30 mirrors, 200 handkerchiefs, 100 pounds of flour and 6 shirts. It is unlikely that Kulin people would have understood this as a transfer of land or agreed to it if they had, but Governor Bourke (Bourke-361) deemed such a treaty invalid as the land was claimed by the Crown rather than the Kulin peoples and other colonists including John Pascoe Fawkner (Fawkner-13) who arrived to settle Melbourne.

Batman and his family settled at what became known as Batman's Hill at the western end of Collins Street. Batman's health became worse after 1835 as syphilis had disfigured and crippled him, he became estranged from his wife, convict Elizabeth Callaghan. They had had seven daughters and a son. His son drowned in the Yarra River. In his last months of his life Batman was cared for by the local Aboriginal

Founded the city of Melbourne. 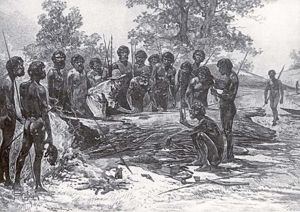 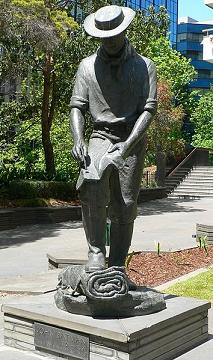 John is 26 degrees from Jaki Erdoes, 20 degrees from Wallis Windsor and 23 degrees from Henry VIII of England on our single family tree. Login to find your connection.