This profile is Genealogically Defined.

Carrol Baty was awarded the World War II Victory Medal.
Carrol Dale Baty was born to a farming family in Newton, Iowa. He was the eldest of 12 children of Leroy and Lola (Hitchler) Baty. Carrol enlisted in the Illinois National Guard in 1940 and was called to active duty in early 1941. He trained for war service at Camp Forrest Tennessee, near present day Tullahoma. It was there that he met his wife, Virgie Ella Ulmer, also of Tullahoma. His regiment was sent to the front and he was in the first flotilla sent to defend Australia from Japanese invasion. He was later injured in New Caledonia and returned to the United States. After recovery, he served the remainder of the war as a Military Police First Sergeant in Salt Lake City, Utah. Virgie joined him in Salt Lake City and the two were married. Two sons were born in Utah and the family migrated to Los Angeles after the war. Carrol and Virgie had four sons and one daughter. Carrol retired to Phoenix Arizona where he died in 2017, 3 months before turning 100 years old.

Carrol's given name was originally spelled Carroll. After he had enlisted in the National Guard it was required that he produce his birth certificate. However, he had never had a birth certificate. He wrote home to his mother in Iowa and she obtained his elementary school records and an affidavit from the school. She submitted his records and applied for a delayed birth record.[2] When the birth certificate was issued the second 'l' was omitted and from then on, his name was "Carrol."[3]

Carrol met and courted Virgie Ella Ulmer while he was stationed in Tennessee just before the outbreak of World War II. When he returned from war service in the Pacific Theater, he was assigned to the 9th Service Comand, Military Police in Salt Late City, Utah. Carrol wrote to Virgie and proposed marriage and she later came by train to Utah. The two were married and migrated to Los Angeles after the war.[3]

He attended Buddington Memorial Bible School in Chicago, Illinois until age 22. He worked as a busboy at Marshall Fields until he joined the U.S. Army at age 23. He enlisted on December 13, 1940[7] and served until October 15, 1945. He held the rank of First Sergeant Military Police of the 9th Service command out of Fort Douglas, Utah.

He met* and [later] married Virgie E. Ulmer on December 20, 1942.**[8] The couple moved to Los Angeles, California where he was honorably discharged from the Army. He worked in the stockroom and finally became manager of the Rexall Drug store in the East Los Angeles. The couple eventually divorced and he ... [moved to] Phoenix, Arizona where he worked as a handy man to the other residents in the retirement facility he resided in until his death.

* Note: Carrol and Virgie met in Tennessee; Carrol was stationed at Camp Forrest near Tullahoma, Tennessee where Virgie and her family lived.
** Note: The obituary lists the year of marriage as 1945 in error.

Is Carrol your relative? Please don't go away!

ask our community of genealogists a question.
Sponsored Search by Ancestry.com
DNA Connections
It may be possible to confirm family relationships with Carrol by comparing test results with other carriers of his Y-chromosome or his mother's mitochondrial DNA. Y-chromosome DNA test-takers in his direct paternal line on WikiTree: It is likely that these autosomal DNA test-takers will share DNA with Carrol: 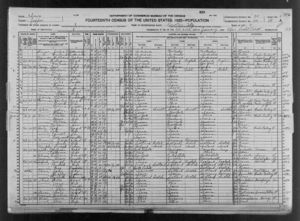 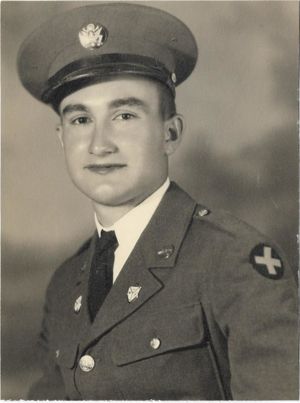 Natalie (Durbin) Trott
the medal is Category: Asiatic-Pacific Campaign Medal with a short dash and not the long one. Also, it is just Category: Army Good Conduct Medal. Please just add the info about the knot device in the biography.

Carrol is 19 degrees from Frederick Douglass, 17 degrees from Margaret Summitt and 18 degrees from Henry VIII of England on our single family tree. Login to find your connection.