Father of William Ransom Baucom and Willison Baucom
Died about 11 May 1848 in Fayette County, Tennessee, USA

This profile is a collaborative work-in-progress. Sourced changes welcome.

Josiah Baucom is said to have been born in 1770 in Wake County, North Carolina, USA.[1] The state and country did not exist at that time, being instead called the Province of North Carolina from 1712-1776.[2] Wake County was formed in 1771 from portions of Cumberland, Johnston, and Orange Counties.[3]

On 24 Jan 1791, Josiah Baucom served as Bondsman for the marriage bond of Rachell Baucom and John Scott in Wake County, North Carolina, United States of America.[4] Rachell Baucom is presumed to be Josiah's sister and the daughter named Rachel Scott in the 1797 Will of Josiah's father, John Baughcom.[5]

Josiah Baughcom was named as a son in the Aug 1797 Last Will and Testament of John Baughcom. The will was proved during the Wake County, North Carolina, June session 1800 and ordered to be recorded. John left a bequest to his wife, Rachel Baughcom, "all my stock of every kind and all my Household Goods and Chattels during her life or Widowhood & after her death to be Equally Divided among my sons James Baughcom, and Reece Baughcom, and Britton Baughcom, and Asa Baughcom & Josiah Baughcom."[5]

A Josiah Baucom was enumerated on the 1800 US Census in Hillsborough, Wake County, North Carolina. The document is in semi-alphabetic order making it difficult to determine how closely those enumerated lived. Several men with names consistent with those of Josiah's known brothers were also enumerated. More research is needed to determine if these were the same men identified in the 1797 will of John Baucom Sr.[6]

This information found at:

OUR HERITAGE A potpourri of information about Union County and its people compiled by John Foster Chapter, Daughters of the American Revolution

Tradition says that James Baucom and Frances Drake were lovers in England, but poor James indentured himself for transportation to America. After working out his transportation, he sent for his true love on the same conditions; they both worked out her transportation and were married in North Carolina. They had two sons, Ransom and John. The author knows nothing of Ransom, but John was living in Wake County In 1790. There were only fifteen Baucoms in North Carolina in 1790, and they were descended from the above John.

Josiah Baucom, with Sally, came with their family prior to 1803 and settled on Richardson Creek on land now owned by John Prichard and are buried near his old home in unmarked graves. Their Children and descendants

1 Lewis was the son of Josiah Baucom and is buried in Davis cemetery near Polkton, the following two sons and a daughter I suppose to be his as they are the only Baucoms that I have to place definitely.

a. Alfred [NOTE marriage records show Alfred as the son of Josiah] married m1) Ann Pistole, who died 4 September 1840 and is buried in Davis cemetery, and m2) Sarah E. Thomas, daughter of Isaac F. Thomas and granddaughter of John D. Green. He left no children. (See Will Book D, page 132 for his family.)
b. Gilliam was the father of seven children:[NOTE marriage records show Gilliam as the son of Josiah]

c. Susan, sister of Alfred and Gilliam, married a Mr. Smith and was the mother of John and Washington Smith, whose son Levi lives near Wingate. (See Will Book D, Page 132, Anson County records.)

2. Asa Baucom, second son of Josiah, married Elizabeth Pistole in 1820. Lived near Parkers Store on Richardson Creek. They were the parents of seven children:

(Will on record in Anson County.)

4. Willis, born July 7, 1809, married m1) Betsy Curlee and m2) Fannie Waddell. He is buried in the John Davis cemetery near Polkton. He was the father of ten children:

(See Will Book D. Page 102. Anson County.)
He owned a large horse-apple orchard which descended to his son Bill, who had them cut down and had an old-fashioned log rolling to pile up the logs to burn. The neighbors tramped Bill’s crops in visiting the orchard to such an extent that he became angry and destroyed this fine orchard.
Willis Baucom, fourth son, was one of the champion fighters of this section, known far and wide. It was a custom in his day for men to fight, not because they were bad, but to see which was the best man: They would strip to the waist, strike a ring, and the neighbors would stand outside to watch until the best man had conquered. Then they would shake hands and depart without any bad feelings.

ask our community of genealogists a question.
Sponsored Search by Ancestry.com
DNA Connections
It may be possible to confirm family relationships with Josiah by comparing test results with other carriers of his Y-chromosome or his mother's mitochondrial DNA. Y-chromosome DNA test-takers in his direct paternal line on WikiTree: It is likely that these autosomal DNA test-takers will share some percentage of DNA with Josiah: 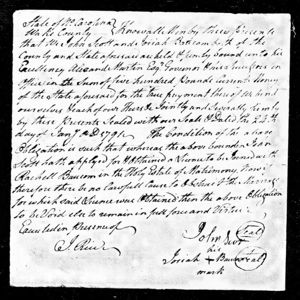 Debi (McGee) Hoag
Baucom-599 and Baucom-50 appear to represent the same person because: same information and wife as shown in our unsourced family history. Our DNA match indicates that these are probably the same man.
posted Apr 08, 2020 by Debi (McGee) Hoag

Jim Baucom Jr.
John Baucom and Rachel Barker had 11 children, named them all in his will.

Jim Baucom Jr.
I have a copy of the Y DNA for a descendant of Josiah Baucom
posted Dec 27, 2013 by Jim Baucom Jr.

Jim Baucom Jr.
I have conducted a Y DNA research project on Baucoms that I will share with everyone. Contact me [email address removed] for a copy
posted Dec 11, 2013 by Jim Baucom Jr.