By the mid-1840s, John purchased The Republican Citizen newspaper of Frederick City. It had numerous owners over its twenty year history but once under John Baughman’s guidance and leadership the newspaper flourished. With John being a life long Democratic Party supporter, those political platforms also found a showcase in John’s editorials. No matter what the issue, debate, conflict or dissension facing Frederick, Maryland or the nation; The Citizen was ready to print its opinion.

As the storm clouds of war darken during the late 1850s and into 1860, John found greater division within his state, Maryland being termed a “border state”. He held onto his belief of states’ rights. Even with the splitting of the National Democratic Party in the 1860 Presidential election, John favored the Vice President John C. Breckenridge, who served under President Buchanan.

By November 1860 and the election of Abraham Lincoln, editorials by The Citizen reflected the uncertainty of the nation’s future. John continued to write of his attitude for each state to choose its own destiny, even if that meant secession from the Union.

As war commenced by April 1861, unrelenting John continued to print his opinions in the newspaper. But a precious price in personal freedom would be paid by John and then his family for his convictions.

The newly elected President Lincoln suspended habeas corpus and the War Department restricted expression especially from the press, even having some newspapers closed down. By July 1861, John Baughman was arrested by the Federal government authorities for treason and placed in the Old Capital building in Washington, DC. John was released a couple weeks later due to some friends’ influence in Washington, Rep. Henry May and Rep. Robert J. Brent, from Baltimore City. To secure his early release John also had to take the Oath of Allegiance to the Union.

But his beliefs quickly had him back at The Citizen, printing editorials on the handling of the war by the Federal government. Throughout 1862 and 1863, angry mobs of pro-Union supporters gathered outside the newspaper office or at his private residence, frightening his wife and children. John continued to be a courageous and fearless writer for his beliefs in spite of this treatment. Even the distribution of The Citizen using the US Postal Service was ordered stopped by Postmaster General Montgomery Blair. That directive lasted nine months and greatly hurt Baughman‘s business.

By 1864, John Baughman was arrested for a second time by order of General David Hunter. Also the newspaper was closed down and John’s personal and business property seized. Then he was transferred south of Federal lines. His wife, Mary and their children were moved out of Frederick and sent south of Federal line to Clark County, Virginia by orders of Major John L. Yellott of Frederick. There they resided with the Dearmont family.

John was in Richmond, Virginia, at Third Auditor’s office of the Confederate, writing and printing whatever was needed to support the Southern cause. At first, he was joined by his oldest son, Louis Victor Baughman. The son later served with the Confederate General McAeer and then joined the First Maryland Cavalry, Co. “D”, CSA. In July 1864, Louis was captured in Moorfield, Virginia and sent to a prison, “Camp Chase” in Ohio (near Columbus). He remained there for nine months and was released in March 1865.

By the end of the war, April 1865, the Baughman family was allowed to return to their home in Frederick. The Democratic Party of Frederick County celebrated his return to town and to The Citizen newspaper. By August, John had the newspaper up and running again. He developed it into four pages in length with each page thirty-two columns. As a strong Democratic Party supporter he continued to reflect that position in The Citizen paper.

John W. Baughman’s supporters always viewed him as a guardian of individual rights; whether those were civil, religious or personal freedoms. 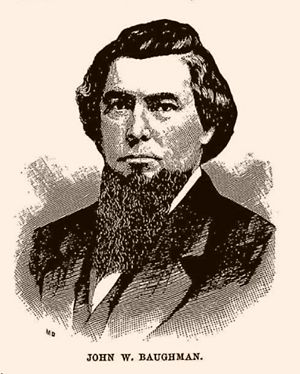