Sojourner Truth was born into slavery c.1797 on the Colonel Johannes Hardenbergh Estate in Ulster County, New York, with the name Isabella Baumfree. Her parents were James and Betsey "Bett" Baumfree.[2][3] Her parents had a total of about ten or twelve children, most of whom were sold away before Isabella was old enough to remember, leaving only Isabella and a younger brother living with their parents.[4] Her birthplace has been identified as Hurley (the town where the 1790 U.S. Census recorded Johannis Hardenbergh), but more specifically it was Swartekill, the site of the Hardenbergh estate, now in the town of Esopus.[5]

Her first owner, Johannes Hardenbergh (name rendered Ardinburgh in The Narrative of Sojourner Truth), died in 1799 when Isabella was about 2 years old, and she, her parents, and "ten or twelve other fellow human chattels" became the legal property of his son, Charles Hardenbergh. Charles Hardenbergh died in 1808.[3] The inventory of his estate lists "Izabella, a Negro Wench," among his property. She and her younger brother, who was listed as "Negro Boy Peet," were each valued at $100.[6] Bett was freed to care for her husband, who was old and infirm[2][3] and was not listed in the estate inventory, presumably because he was no longer able to work. They were allowed to continue living in the damp cellar of the Hardenbergh house. Isabella and her brother Peet were, however, sold at auction to different owners in 1806.[7] She would be sold twice more by the age of 13, in 1808 and 1810.[8]

She did not know how to read or write English; her first language, until about age 9, was Dutch. As a slave Isabella worked at spinning wool, helping to keep house and helping in a tavern.[8]

The minor child Isabelle Baumfree had two children, the second fathered by her last owner and rapist, John Dumont:[8]

In 1799 the State of New York began the process of abolishing slavery; it would be eight years before completion, on July 4, 1827. John Dumont had promised her freedom in 1826. When he reneged on his promise Isabella spun him a final hundred pounds of wool, and walked to freedom, taking only her infant, Sophia. She found refuge with Isaac and Maria Van Wagenen, who would help her go to court when she learned that John Dumont had illegally sold her five year old son, Peter. She became one of the first black women to go to court against a white man and win the case.[8][9]

The experience was transformative; after escaping to freedom and successfully using the legal system to recover her son, Isabella became a devout Christian in 1829.

The year 1843 was a turning point for Baumfree. She became a Methodist, and on June 1, Pentecost Sunday, she changed her name to Sojourner Truth. She chose the name because she heard the Spirit of God calling on her to preach the truth. She told her friends: "The Spirit calls me, and I must go," and left to make her way traveling and preaching about the abolition of slavery.[8]

From that time she used her powerful and resonant voice and study of scripture to sing and preach at first a spiritual message and later abolition and women's rights, drawing crowds sometimes described as mobs, which she fearlessly calmed and even scolded when necessary.

Her most famous speech, later called the "Ain't I A Woman" speech, made in 1851 at a Women's Rights Convention in Akron, Ohio, extemporaneously argued for a place in the women's movement for women of color.

"Black women, of course, were virtually invisible within the protracted campaign for woman suffrage", wrote Angela Davis, supporting Truth's argument that nobody gives her "any best place"; and not just her, but black women in general.[10]

She helped recruit soldiers for the Union Army; her grandson, James Caldwell, enlisted. She worked for the National Freedman's Relief Association in Washington, D.C. to improve conditions for African-Americans. She rode in the streetcars to help force their desegregation. She was a tireless advocate for fulfillment of the promise of "40 acres and a mule," land grants from the federal government to the formerly enslaved, a project she pursued for seven years without success.[8]


Memories: 3
Enter a personal reminiscence or story.
Xander Schauffele Schauffele
A defining moment in Sojourner's life was when she left her husband with her youngest child and worked for the family of Isaac Van Wagenen. While working with that family her youngest child was sold to a slave owner in Alabama. There was one problem, her son was emancipated under New York Law and Sojourner sued in court and actually won the case. Since this occurred this caused Sojourner to become an activist and abolitionist.

Later on in Sojourner's life she attended a Methodist perfectionist commune and became a religious prophet. Shortly after the commune fell apart. After experiencing this part of her life she became a traveling preacher. She started to speak about woman suffrage and was a very popular speaker. In 1851 she held her most famous speech, Ain't I a Woman?, in a women's rights convention in Ohio.

Sojourner Truth is a significant person in U.S. history because she actually made a difference in this world. She took all the bad events in her life and turned them into the positive by being an abolitionist and by being helping other people.

Quote: “If women want any rights more than they's got, why don't they just take them, and not be talking about it.” -Sojourner Truth

posted 30 Oct 2009 by Xander Schauffele Schauffele
Taylor Pederson
Born in 1797, Sojourner Truth whos birth name was Isabella Baumfree was the daughter of Elizabeth and James Baumfree with 12 other brothers and sisters. She was born into slavery on the Hardenbergh plantation. She spoke in Dutch most her life until she was sold from her family around the age of nine. After being sold to her second master, Charles Hardenbergh she quickly learned to speak English, but had a Dutch accent for the rest of her life. After Truth's second master died she was sold multiple times until she got stuck with one, John Dumont. In 1815 she fell in love with a man named, Robert, who was owned by another man. Their love was forbidden by both masters for the children would not be their 'property'. Her first love died after being brutally beaten by his master’s son, shortly after she gave birth to his daughter, Diana. Two years later Truth got married to an older slave, Thomas who she had four more children with. Late in 1826, Truth escaped to freedom with her youngest daughter, Sophia. Truth experienced a religious change and moved to New York City and to a Methodist perfectionist commune, and there came under the influence of a religious prophet named Mathias. In 1843, she changed her name to Sojourner Truth. In the late 1840s she connected with the abolitionist movement, becoming a popular speaker. In 1850, she also began speaking on woman suffrage. Her most famous speech, Ain't I a Woman?, was given in 1851 at a women's rights convention in Ohio. Truth traveled all around the Mid West and East preaching for human rights. She was powerful figure in national social movements. Though Sojourner Truth was not an active participant in the Underground Railroad, she did assist many blacks who had previously traveled this route to freedom by helping them find new homes. Sojourner Truth returned to Michigan where her health deteriorated and she died in 1883 in a Battle Creek sanitorium of infected ulcers on her legs.
posted 30 Oct 2009 by Taylor Pederson
ashley diaz
“I am not going to die, I'm going home like a shooting star.”

“[That little man in black says] woman can't have as much rights as man because Christ wasn't a woman. Where did your Christ come from? . . . From God and a woman. Man has nothing to do with him.”

"Ain't I A Woman" speech 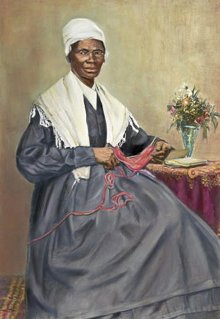 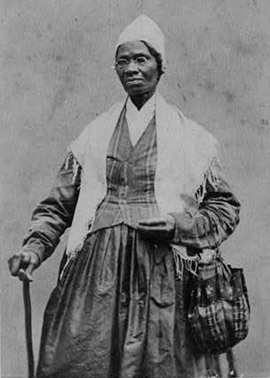 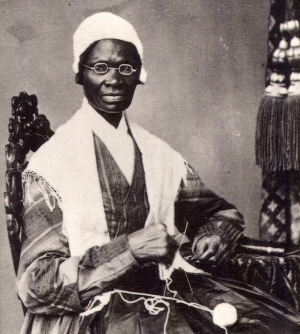 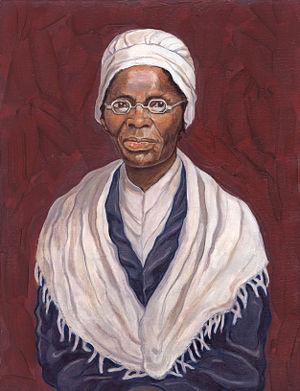 Leave a message for others who see this profile.
There are no comments yet.
Login to post a comment.
Jim Boylan
Associated Press article at https://apnews.com/article/new-york-education-slavery-kingston-government-and-politics-3b0d38ed6e556d77ba074f58dfb3c131 about her petition to recover her son Peter has him about 5 years old in 1826. “He ended up, as many troubled young men did at that time, on a Nantucket whaling vessel, and he was finally lost at sea,” said Nell Irvin Painter, author of “Sojourner Truth: A Life, A Symbol.”
posted Jun 19, 2022 by Jim Boylan

ShiraDestinie Jones MPhil
Thank you for all of your hard work in creating this page.