George B. GARDNER was originally named George BAUMGARDNER (BAUMGARTNER). He married Mary SADLER (called Polly) ca 1808-1810, York PA. who was very proud of the fact that her parents were "high Dutch" from Holland. George and Mary BAUMGARDNER moved from York, PA. to Tenn. and first settled at Kingston. Later, they moved to Elkton, Tenn., and while living here, he changed his name to George B. GARDNER. His wife never approved of the change and after his death, again called herself Mary BAUMGARDNER. She died in 1856, Giles Co., Tenn.

ask our community of genealogists a question.
Sponsored Search by Ancestry.com
DNA Connections
It may be possible to confirm family relationships with George by comparing test results with other carriers of his Y-chromosome or his mother's mitochondrial DNA. However, there are no known yDNA or mtDNA test-takers in his direct paternal or maternal line. It is likely that these autosomal DNA test-takers will share some percentage (beta) of DNA with George: 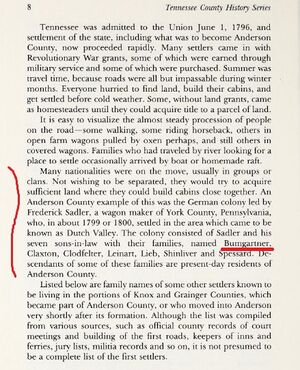