Mary (Bayley) Holt is a Qualifying Ancestor of the Jamestowne Society

Mary Bayley, was born about 1609. By 1620, Mary Bayley was an "orphan" indicating both her father and mother had died. As the only child of John Bayley she received as her inheritance the patent of 700 acres called Hogg Island in Surry County. Robert Evers was her guardian after the death of her father, until she was of age to take possession of her inheritance. She married Randolph (Randall) Holt in 1626 in Hogg Island, Surry, Virginia. Mary died abt 1636 in Jamestown, VA.[1] [2]

Mary's husband, Randall Holt is found in the 1624 Census of Jamestown. He is listed as being 18 years of age, a servant of Dr Potts, having arrived on the "Abigaile" in 1623 [3]

In "Southside Virginia Families", Volume 2, by John Bennett Boddie, Boddie states on page 275 that Mary is the only daughter and heir of planter, John Bailye, late of Virginia. A paragraph later, Boddie writes that Mary's son, Randall Holt. was the heir of Mary Bailey, daughter of John Bailey. In the remainder of the section Mary is referred to as Mary Bailey. [4]

Mary's father John is listed as John Bayley in the roster of ancestors, National Society of the Sons and Daughters of the Pilgrams, an organization founded Dec 21. 1908 to perpetuate the memory and to foster and promote the principles and the virtues of the Pilgrims. [7]

"Cavaliers and pioneers; abstracts of Virginia land patents and grants, 1623-1800" lists land transactions of several members of the Bayley family in the Jamestown area, including Mary and her son, Randall Holt. The volume uses the Bayley spelling where ever members of this family are mentioned, except where a public record is transcribed and the original spelling in the document is used. [8]

John Bayley and daughter Mary Bayley Holt are designated as being "Ancient Planters" in the reference, "Virginia Immigrants and Adventurers, 1607-1635: A Biographical Dictionary" [9]

RANDALL HOLT, 710 acs. Aug. 1, 1643, Page 880. Sonn & Lawfull heire of Mary Bayley, late of Hogg Island, sole daughter and heire of John Bayly of the sd. Island. 700 acs. called Hogg Is. lying over against Archers Hope on the Tappahanna side of the river, & 10 acs. in James Island adj. the late dwelling howse of Robert Epers, towards Goose Hill, N. towards land lately belonging to William Fairefax & W. upon land lately belonging to Jenkin Andrewes. 490 acs. being expressly granted to the sd. Mary Bayly by the name of Mary Bayly Orphant, Feb. 20, 1619, with the special clause & provisoe that if upon due survey hereafter to be made the sd. island doe not amount to fower hundred and nyntye acres that soe much as it wanteth shall be supplyed to the said Mary Bayly in some other place and if the said Island doe conteyne above fower hundred and nyntye acres that then the said Mary doe purchase the Surplusage from the Company, etc. The surplus being 210 acs. is now due by trans, of 5 servts. in the Shipp William and Thomas Aug. 24, 1618 by John Bayly: Hugh Price, William Done (or Dove), Phillipp Roper, Henry Broughton, Robert Reddinge. [10]

It seems evident when reviewing transcripts of Virginia documents from the period and location where Mary Bayley, her father, John Bayley and other Bayley family members lived that Bayley was the most common spelling used. No birth or christening records for Mary Bayley were found. In the absence of primary birth records, or signature examples, existing public records (transcripts of census and land records) or derivative sources that cite original records of the period will be followed. Those records for the most part use the Bayley spelling of the surname and that spelling will be used to be consistent with most common usage.

Note that the Jamestowne Society lists her and her father as "Bayly".[11] 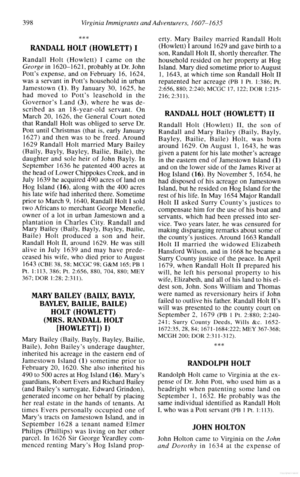 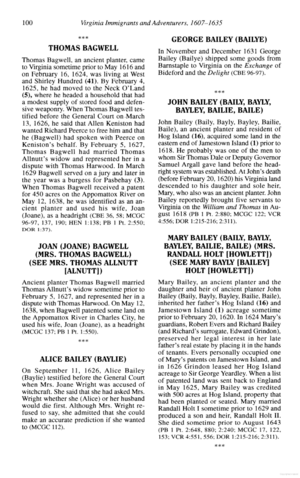 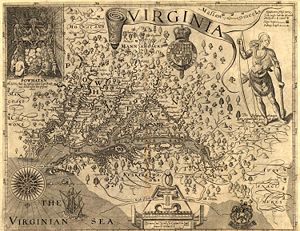 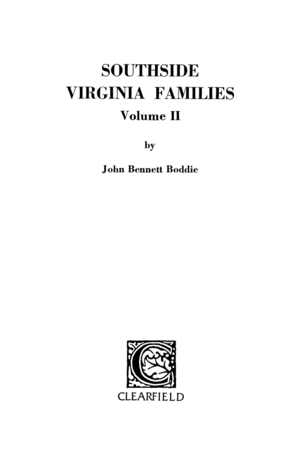 David Douglass
Bailey-11124 and Bayley-97 appear to represent the same person because: Removed unmerged match so merge can be completed.
posted May 02, 2016 by David Douglass

David Douglass
Bayley-97 and Bailey-11124 are not ready to be merged because: more research is needed to determine correct LNAB spelling
posted May 01, 2016 by David Douglass