"Samuel Gamble Bayne (1844 - 1924) was a remarkable man who made his fortune in America. A businessman, international traveller, philanthropist, international cricketer, artist, cartoonist and author; he had a fascinating life. Born in Ramelton, Samuel was the son of a Presbyterian merchant. The Bayne family lived on the Mall, by the bridge (Bayne’s Lane) where they ran a grocers shop. He attended the Belfast Academical Institution and graduated from Queen's University Belfast. He went into the linen business with his cousin William Rea at Belfast, whose flax products were doing good business because of the cut-off of cotton during the US Civil War."

"Aged twenty-five in 1869, Samuel decided to travel to America to seek his fortune - the intention being to plant cotton. Instead he invested in the Sugar House oil well near Titusville, Pa., the second oil well drilled in America. Later, he organized an oil well supply corporation which developed into the National Supply Company, and then the First National Bank of Bradford, Pa. In 1883, he founded the Seaboard National Bank (now JP Morgan Chase) in New York, and became its Chairman of the Board in 1922. He was also one of the original directors of the Bankers' Trust Company and the Columbia Trust Company. Samuel accumulated enough wealth to be described as a billionaire by the end of the 1800s."

"As President of the Riverside Drive Property Association, Bayne was involved in keeping the area around his home as elegant as possible. Bayne’s Atlas Improvement Company invested in real estate around New York City and bought many parcels of land on the west side including vacant lots on 107th Street and 108th Street near his Riverside Drive home."

"When Bayne agreed to sell the Riverside Drive lots near his villa in 1899 to Adolphe Openhym and the builders, Smith & Stewart, Bayne had restrictions put into the sales agreement stipulating how the the lots would be developed. Bayne specified that “high class residences” with no more than two detached homes were to be built on the lots and that there be at least 30 feet between the houses in the middle of the block and those on either corner."

"Bayne’s wife Emily passed away at their home in 1911 and Bayne continued slowly selling off all his remaining property, until he was only left with his villa."

"Bayne’s 1887 original home at 360 Riverside Drive was bought in 1915 for $150,000 from Henry S.F. Davis’ heirs Cora B. and John A. Rutherford by the Anthony A. Paterno Construction Corp. In 1916 Paterno completed a 13 story building on the site and resold the property and the fully rented building to John A. Rutherford for $425,000. The building, appropriately named the Rutherford Apartments remains there today and is now a co-op."

"In December 1921, Bayne finally sold his long time home to Harris H. Uris who demolished the landmark house and in 1922 completed a 14 story apartment building which stands on the site today. The architect was Alfred C. Bossom, who was Samuel Bayne’s son-in-law. Bayne announced that when the building was completed, he would occupy the entire 14th floor as his residence, as the views were the finest in New York."

"A man of sound education, a broad outlook and liberal culture, he was able to glean something from life besides dollars. Samuel authored several books on subjects as diverse as astronomy and travel in Scandinavia. A philanthropist and patron of the arts and professions, his story, told in his memoir ‘Derricks of Destiny’, is an extraordinary tale of an industrious Irishman living the ‘American Dream’." 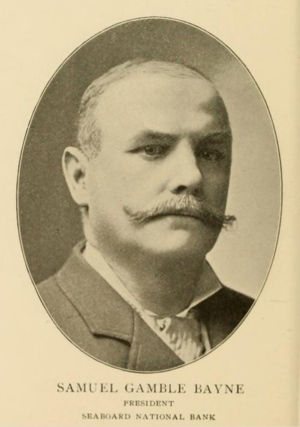 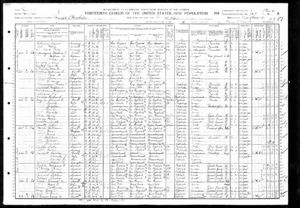