Rose Bayon aka Bayols, Bayol, Bayou
Born about 1631 in France

NOTICE: this profile is protected by the Acadian Project because of frequent duplication, variant name spellings, attempts to add unsourced parents, and she is matriarch of the Acadian Comeau family. Please contact the Acadian Project before making any substantive changes. Thanks for helping make WikiTree the best site for accurate information.

Rose Bayon is the ancestral matriarch of the Acadian Comeau family. Rose was born around 1631 presumably in France. [1].

Around 1649 she married Pierre Comeau.[1] Between about 1650 and 1665 the couple had nine children: Étienne, Pierre the older called L'Esturgeon, Françoise, Jean the elder, Pierre the younger, Antoine, Jeanne, Marie-Jeanne (Marie-Anne), and Jean the younger.

DNA. The Mothers of Acadia Maternal DNA project is conducting ongoing research to verify their origins. In 2010, Stephen White reported Rose Bayon had a Haplogroup J*. Ongoing test results are also reported here. As of May 2014, 1 descendant reported a J haplogroup, indicating European origins. Other tests resulted in mtDNA Haplogroup J*[4] And a reputed descendant had mtDNA test which proved to be Haplogroup J*, not of native American origin. [5]

Could her father be Nicholas Bayolle? If true, evidence, not theory is needed.[6][7]

Sponsored Search by Ancestry.com
DNA Connections
It may be possible to confirm family relationships with Rose by comparing test results with other carriers of her mitochondrial DNA. However, there are no known mtDNA test-takers in her direct maternal line. It is likely that these autosomal DNA test-takers will share some percentage (beta) of DNA with Rose: 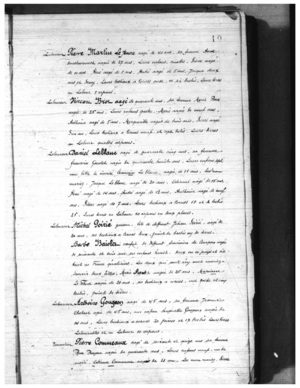 Henry Morneau
I was at NEHGS in Boston and saw a book titled "Families Acadiennes" by Leopold Lanctot, published c1994. In the chapter on Comeau's on page 128 he indicated Barbe Bayolet is sister of Nicholas Bayol. On page 129 he indicates some of Barbe's children were cousins to Rose Bayol. I do not know how credible the book is but it does have much detail and seems to have been researched very well.
posted Jun 10, 2018 by Henry Morneau

Donna (Friebel) Storz
Rose's mother is NOT Barbe Bajolet. I'm sure people get confused because Barbe Bajolet sometimes has a dit Bayol name...but that does not mean she was married to Nicholas Bayon/Bayol. She was wed to Isaac Pesseley when Rose was born and interestingly Isaac and Nicholas Bayon were both on the St Jehan together, but Barbe was not aboard reportedly.
posted Mar 13, 2016 by Donna (Friebel) Storz

Richard Van Wasshnova
4 Biographys and SAW show Bayon only but her profile shows Bayol and no alternate name. If you don't change surname surname to Bayon at least add as alternate name.

Also no source given for her parents. Also submitting a merge.

Lianne Lavoie
Bayol-15 and Bayol-12 appear to represent the same person because: All vitals match or are very close. Same spouse.
posted May 14, 2015 by Lianne Lavoie