John Beals Sr aka Beales
Born about 27 May 1650 in Rumboldswyke, Chichester, Sussex, England

Caution: the date and place of origin of John Beals are presently unknown. Until those are documented any parents attached are Uncertain and speculative. Please do not add birth or christening records without definitive documentation they are this John Beals. Any speculative records should be added under Research Notes.

The following is adapted from "The Beals Family" by Bill Putman[1] with additional citations and notations from other researchers, genealogists, and sources.

John Beals (Beales) was born in Wales, Worcestershire or perhaps Yorkshire in the early 1650s. Researcher Roger Boone gives a birth date of 28 Jan 1650 for John. With his place of birth currently uncertain, his parentage is presently speculative.

No record can be found on any passenger lists to show when or where he arrived in America. Boone feels he came to America from Wallsworth in Gloucestershire, a seaport on the Welsh-English border. Some believe that he, like so many of the early Quakers, settled in John Fenwick's Colony in Salem, New Jersey.There is reasoned conjecture by Ruth Kline Ladd[2] that he may have gone first to Ireland, perhaps Scotland, prior to arriving in America. Ladd believe's he emigrated to New Jersey from Fenwick aboard the Griffin in 1675 which is known to have taken passengers from Ireland and Scotland.[2]

It is known that John Beals came to Pennsylvania sometime prior to 1677. In a 1691 court case in Chester County, Pennsylvania, John testified that he had plowed the land in question some fourteen years earlier, placing him in Chester County in 1677. He would have come somewhat earlier. His father in law, William Clayton, had come in 1677 and he may have arrived at the same time. Again, there is no arrival record that exists today.

There is documented proof that the Clayton family of his wife arrived on board the ship Kent on August 16, 1677. There is an entry in the "Annals of Philadelphia, and Pennsylvania" that says:

"The following were among those who came over before the end of the year 1682:

John was in Chester County in 1677 and had his own farm there in 1679. In the minutes of the Chester Monthly Meeting, there is a reference on October 2 1682 where John announced his intentions to marry Mary Clayton, daughter of William Clayton and Prudence Langford Clayton.[4] Mary was born in the parish of Rumbaldsweek, Sussex, England on August 29, 1665. They were married on January 1, 1682/3.[4][5]

In 1702, the Beals and others took up lands in what was called the Nottingham Lots which were then a part of Chester County, Pennsylvania, but after the drawing of the Mason-Dixon Line in 1767, placed these lands in Cecil County, Maryland. John Beals received a grant for two lots in the new area of Nottingham.[5] As late as 1705, he still owned lands in West Chester, Chester County, Pennsylvania.

These Quaker families established the new Nottingham Monthly Meeting and both John and Mary were quite active in Church life. Mary was chosen Overseer in 1706 and John was also chosen in 1709.

John and Mary Beals had at least five children.

Some records include a Grace Beals but that profile presently lacks primary source documentation and she is not included in Hinshaw's unpublished records for New Garden Monthly Meeting.

Will of John Beals Sr.

1. To eldest son John, bed and furniture and £5, paying to his 5 children viz Sarah, John, Thomas, Ann, and Phebe, 10 shillings when of age. (grandchildren)

2. To daughter Mary Harrold £8, Paying to each of her children, viz Elizabeth, Rachel, Jonathan and Richard 10 shillings when of age.

3. To son Jacob £12, paying to each of his four children, viz John, Jacob, Mary and William 10 shillings when of age.

4. To daughter Patience Jones the £8, 15 that is due of bond of her husband and £5 more paying to their 4 children. viz Judith, Mary, Sarah and Charity 10 shillings each, when of age.

Date of Birth note T Stanton 6 Aug 2019 20:54 UTC
See the g2g for additional discussion but a more reasonable estimate for his year of birth would be 1657-1658. That would reduce the age disparity at marriage (although the current 15 year estimated difference is not without precedent) yet accommodate the statement of activity in 1667. 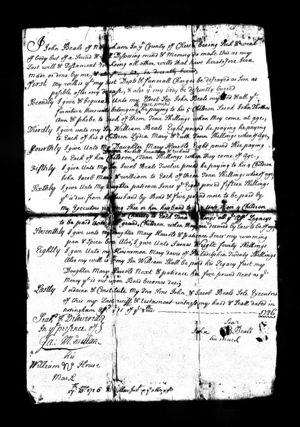 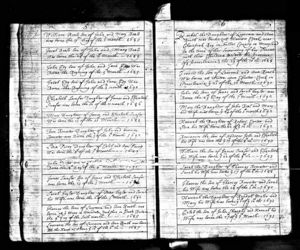 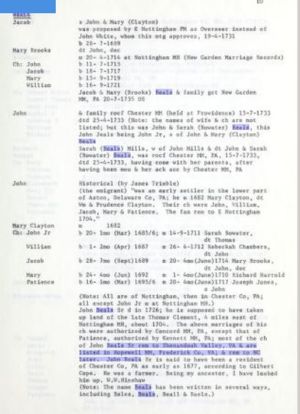 T Stanton
I would concur on detachment and leave a notation (with links) about it under Caution or in Research Notes. Also think we may need to reconsider the year of birth per notations now in the g2g forum for this profile. Meanwhile, want to revisit Ruth Ladd's genealogy work and see if anything comes to mind in light of the recent discussions. When she doesn't have primary source documentation she always has a cogent reason for any postulations.
posted Mar 16, 2019 by T Stanton

Based on this information, and that both parents are completely unsourced I would like to open discussion that they be detached completely. And possibly even merged into the Bowater profiles or marked as [Uncertain Existence].

T Stanton
Bio rewrite and re-sourcing completed. Suggestions? Should we formally change the parents to Uncertain? They are uncertain and speculative. Currently investigating Ruth Kline Ladd's theory that he first went to Ireland before Pennsylvania. Hopefully something will turn up in Quaker records not available to Ruth in 1974. Thanks to Darlene for below.
posted Jan 22, 2019 by T Stanton

wikitree-penn-project@googlegroups.com as a Profile Manager account so the project can assist in tracking and improving this profile. Thank you.

SJ Baty
This profile seems to have a lot of gedcom residue, missing sections, & some missing source citations. I opened a G2G thread in case the discussion is too much for the comment bar here. https://www.wikitree.com/g2g/667413/john-jacob-beals-sr-1650-1726
posted Aug 21, 2018 by SJ Baty

David Wilson
Several sketches and paintings go much further back. I am always amazed by graphic artists that can combine family characteristics into their work. The manner in which statistics and computers are used is great!
posted Jun 19, 2018 by David Wilson

John is 20 degrees from Danielle Liard, 14 degrees from Jack London and 12 degrees from Henry VIII of England on our single family tree. Login to find your connection.