Alan La Vern Bean was a United States Astronaut, known for his participation as the lunar module pilot of the Flight of Apollo 12, November 14-24, 1969.

The son of Arnold Bean and Frances Caroline (Murphy) Bean,[2] Alan graduated from Paschal High School, in Fort Worth, Texas, in 1950. While in high school, he wanted to join "The Pilots," a group of the Naval Reserve. His father signed the necessary papers for his enlistment, as he was only 17 years old at the time. After graduation, he entered the University of Texas on a Naval scholarship and majored in aeronautical engineering and became a champion wrestler as a freshman. On graduation, he received a Naval commission and served four years in an attack squadron at Jacksonville, Florida.

In 1963, Alan was named to the Astronaut Corps from the Navy[4] and began intensive training. On the second manned flight to the moon, Alan spent two days performing exploration and scientific studies. He was the 4th man to set foot on the moon.

Alan was the guest speaker at the 1967 International Bean Reunion, in Lincoln, Nebraska. During his address, he described how he carried a yard of the Clan MacBean Tartan cloth to the moon and left a portion of it there.

For an in depth biography of Alan Bean, and photographs, see also this webpage: http://alchetron.com/Alan-Bean-164560-W

Bean flew on two NASA space missions - Apollo 12 in 1969 as LM Pilot with Dick Gordon and Pete Conrad, and Skylab 3 in 1973 as Commander with Owen Garriott and Jack Lousma.

Is Alan your relative? Please don't go away!

ask our community of genealogists a question.
Sponsored Search by Ancestry.com
DNA
No known carriers of Alan's ancestors' DNA have taken a DNA test. 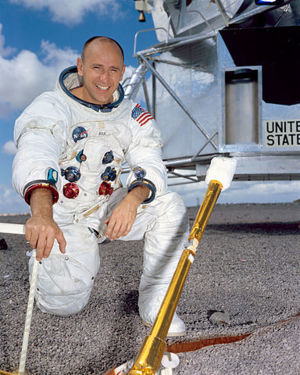 Alan is 28 degrees from Ludwig Kraayenbrink, 17 degrees from Henry VIII of England and 31 degrees from Ferdinand von Zeppelin on our single family tree. Login to find your connection.