James Andrew Beard was born in 1903 in Portland, Oregon, the son of John Beard and Mary Brennan. His mother, an independent English woman passionate about food, ran a boarding house. His father worked at Portland’s Customs House. The family spent summers at the beach at Gearhart, Oregon. There, they fished, gathered shellfish and wild berries, and cooked meals with whatever was caught.

At age three Beard was bedridden with malaria, and the illness gave him time to focus on the food prepared by his mother and Jue-Let, the family's Chinese cook.[1] According to Beard he was raised by Jue-Let and Thema, who instilled in him a passion for Chinese culture.[2] Beard reportedly "attributes much of his upbringing to Jue-Let," whom he refers to as his Chinese godfather.[3]

He briefly attended Reed College in Portland, but, according to biographer Robert Clark, was expelled during his freshman year at Reed after having affairs with "one or more male students and a professor."[4] However the college did grant him an honorary degree in 1976. In 1923 Beard went on the road with a theatrical troupe. He lived abroad for several years studying voice and theater, but returned to the United States for good in 1927. Although he kept trying to break into the theater and movies, by 1935 he needed to supplement what was a very non-lucrative career and began a catering business. With the opening of a small food shop called Hors d’Oeuvre, Inc., in 1937, Beard finally realized that his future lay in the world of food and cooking.

In 1940, Beard penned what was then the first major cookbook devoted exclusively to cocktail food, Hors d’Oeuvre & Canapés. In 1942 he followed it up with Cook It Outdoors, the first serious work on outdoor cooking. Beard spent the war years with a brief stint in cryptography, but he primarily served with the United Seamen’s Service, setting up sailors’ canteens in Puerto Rico, Rio de Janeiro, Marseilles, and Panama.

When he returned to New York in 1945, Beard became totally immersed in the culinary community. Between 1945 and 1955 he wrote several seminal cookbooks. He appeared in his own segment on television’s first cooking show, “I Love to Eat” on NBC in 1946, and then on many other spots on television and radio. Beard contributed articles and columns to Woman’s Day, Gourmet, and House & Garden and served as a consultant to many restaurateurs and food producers. He also ran his own restaurant on Nantucket, becoming the focal point of the entire American food world.

In 1955, Beard established the James Beard Cooking School. He continued to teach cooking to men and women for the next 30 years, both at his own schools (in New York City and Seaside, Oregon), and around the country at women’s clubs, other cooking schools, and civic groups. Beard was a tireless traveler, bringing his message of good food, honestly prepared with fresh, wholesome, American ingredients, to a country just becoming aware of its own culinary heritage. He also continued to write cookbooks, most of which became classics and many of which are still in print.

James Beard came out as gay in 1981, in Delights and Prejudices, a revised version of his memoir, saying "by the time I was seven, I knew that I was gay. I think it's time to talk about that now."[5] In 1956, Beard met architect Gino Cofacci, who later moved in with him. Cofacci became an accomplished pastry chef and the two men hosted many dinners and gathers at their home. After Beard’s death in 1985, Cofacci was given an apartment in Beard’s townhouse in the will and the house on 12th Street became the James Beard Foundation.[6] Cofacci died in 1989. [7]

James Beard died of heart failure on January 21, 1985 at his home in New York City at age 81. He was cremated and his ashes scattered over the beach in Gearhart, Oregon, where he spent summers as a child. 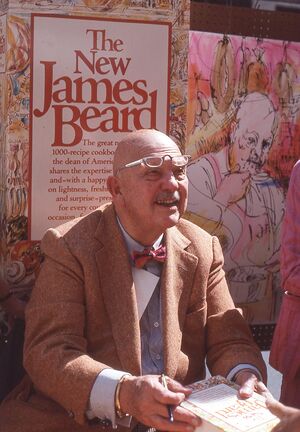 Abby (Brown) Glann
We are featuring James as the Example Profile of the Week in the Connection Finder on April 7. Between now and then is a good time to take a look at the sources and biography to see if there are updates and improvements that need made, especially those that will bring it up to WikiTree Style Guide standards. We know it's short notice, so don't fret too much. Just do what you can. A Team member will check on the profile Tuesday and make changes as necessary.