Mary Annette Beauchamp was born in 1866 in the family home at Kirribilli, New South Wales, Australia. She was the youngest child of Henry Beauchamp and Elizabeth Lassetter.[1]

In 1870, when she was just three years of age, Mary's parents decided to follow her mother's wealthy brother Frederick Lassetter to live in London where opportunities for culture and education would benefit the growing family. The Lassetter and Beauchamp families were keen to spend time looking round Europe; it was not long before they left London to take up residence for a couple of years on the shores of Lake Geneva in Lausanne, Switzerland. The beauty of the place, and especially its mountain meadows in springtime, made a lasting impression on Mary.

Studying music, and particularly the organ, at the Royal College of Music, under famous teacher, Sir Walter Parratt, had Mary considering a career as a professional musician. However, her parents became concerned that, at the age of twenty-two, their petite and beautiful daughter’s marital chances were rapidly diminishing; so they organised a tour of Europe, with the aim of finding her a suitable husband. And that she did. While staying in Rome in 1889, she met the newly widowed Graf Henning von Arnim-Schlagenthin, a member of the Prussian aristocracy and a friend of the Wagner family. He was captivated by the talented, charming and vivacious young woman, and so impressed by her organ playing that he whisked her off, in the company of her parents, to Bayreuth to be introduced to the heart of Prussian society, and to perform Bach and Liszt on the organ before Liszt’s daughter, Cosima Wagner.

On 21st February 1891 at Kensington, London, England, she married her German Count and diplomat, Henning August Graf von Arnim-Schlagenthin.[2] She became entitled as Gräfin (Countess) von Arnim-Schlagenthin. Henning was informally known as Harry von Arnim. They had three daughters whie enjoying life as members of the Prussian aristocracy in Berlin.

Visiting the von Arnim’s country estate at Nassenheide in the spring of 1896, altered everything. She decided immediately that she would live there with her growing family. She had arrived in her German Garden. It was from here that she wrote her first novel, Elizabeth and Her German Garden, which was published by Macmillan in 1898 and became an instant best-seller, making her a fortune. Over the years, she developed her literary career, going on to complete twenty further highly successful novels. As ‘Elizabeth’, Mary established an international literary reputation. Her works were usually published with the phrase ‘by the author of Elizabeth and her German Garden’ as the only a guide to their authorship. Her best-loved novel is perhaps The Enchanted April (1922), which has twice been adapted to film; first by Harry Beaumont in 1935 and more recently by Mike Newell in 1992.

change brought by the death of Harry von Arnim, and World War

On the death of the Count von Arnim in 1910, she and her five children (including the Count’s longed-for son) left Prussia. She divided her time between various London addresses and her main base, her Chalet Soleil (built in 1911-12) in Crans Montana, Switzerland. As soon as possible after the outbreak of war in 1914, Mary Annette (Elizabeth) von Arnim became naturalised as a British citizen. The war years saw the deaths of several close friends and family members, including her youngest daughter Felicitas, who died in Germany aged sixteen.

In 1916 at St Martin, London, she married twice-divorced Lord Russell, 2nd Earl Russell.[3] The marriage was a disaster and the couple separated three years later; however, they never divorced and she was known as Elizabeth, the Countess Russell, for the rest of her life.

In the early 1920s, ‘Elizabeth’ was able to return to her chalet where she found pleasure in the company of her younger cousin, Katherine Mansfield (1888 – 1923), who was staying in Montana for health reasons. The Chalet Soleil also became the background for Elizabeth’s romantic relationship with the young Alexander Stuart Frere-Reeves (later president of Heinemann), who went there initially to catalogue her vast and growing book collection.

In 1930, seeking a warmer climate, she made her home at the Mas des Roses in Mougins, France, where she lived for nine years. There, she created a wonderful garden, took delight in her many dogs and entertained friends and family. Her collection of books was transferred from her chalet, where she added to it on a regular basis.

The threat of war in 1939 forced her to flee to the United States of America, where two of her daughters and son were living. It was a cause of some anguish that her third daughter, Beatrix von Hirschberg, had to remain in Germany.

While she was in the United States, the publication of her acclaimed last novel, Mr Skeffington, made her enormously popular with the American public. However, although supported by her devoted second daughter Liebet (Elizabeth von Arnim) and her close friends, the publisher Nelson Doubleday and his wife, Elizabeth’s fragile health suffered during her itinerant life in the United States. The world parted with a special gem when 'Elizabeth' passed away on 9th February 1941 at Charleston, South Carolina, United States of America; far from her native Australia, her adopted England, and her war-torn German Garden and French Mas des Roses.

After the end of the Second World War, her ashes, in accordance with her wishes, were taken by Liebet to be interred with those of her brother, Sir Sydney Beauchamp, in the small churchyard of St Margaret’s Church, Tyler’s Green, Buckinghamshire, England. 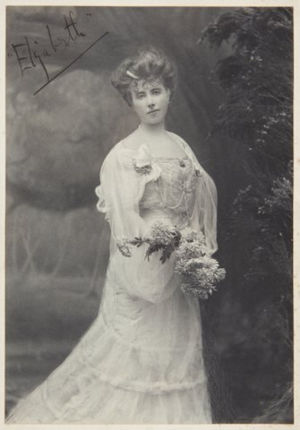 Mary is 21 degrees from Peter Roberts, 17 degrees from Emma Smith and 14 degrees from Henry VIII of England on our single family tree. Login to find your connection.