James Beauclerk (1671-1680) was the illegitimate son of King Charles II Stuart and Nell Gwyn. His name was given to him by inference when on December 27, 1676, the king conferred the name, Charles Beauclerk and the titles Baron Heddington and Earle of Burford on James older brother.[1] Thereafter James was known as "James Beauclerk."[1]

James died in childhood. We know only that he died of 'a sore leg,' possibly meaning that he wounded it and the leg became gangrenous. Both his parents may have died of syphilis. One of the common symptoms of congenital syphilis is bone pain and inflammation.[2] James died in September, 1680 at Paris, France.[1]

ask our community of genealogists a question.
Sponsored Search by Ancestry.com
DNA Connections
It may be possible to confirm family relationships with James by comparing test results with other carriers of his ancestors' Y-chromosome or mitochondrial DNA. Y-chromosome DNA test-takers in his direct paternal line on WikiTree: 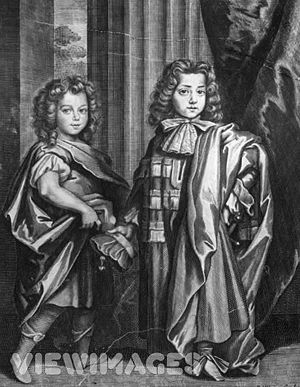