George Beauclerk was a member of the aristocracy in British Isles.

George Beauclerk was a member of the aristocracy in British Isles.

He had been educated at Eton 1742-48, and also succeeded his father in the positions of Hereditary Grand Falconer of England, Hereditary Register of the Court of Chancery and High Steward of Windsor. He was appointed a Lord of the Bedchamber in August 1751, and Lord Lieutenant of Berkshire November 1751-1760 and July 1771-1786.

He was in 'constant financial difficulties and twice had to leave England to avoid his creditors' and died in the Rue Royale, Bruxelles (Brussels) on 1 February 1786, and was buried 11 March 1786 in Westminster Abbey. His will dated 13 September 1785 was proven on 10 May 1786.

He was the only son of Charles and Lucy and was buried 11 March 1786 in the Duke of Ormond's vault in Henry VII's chapel. His name is inscribed on the stone over that vault. He married Jane Roberts but had no legitimate children.

ask our community of genealogists a question.
Sponsored Search by Ancestry.com
DNA Connections
It may be possible to confirm family relationships with George by comparing test results with other carriers of his ancestors' Y-chromosome or mitochondrial DNA. Y-chromosome DNA test-takers in his direct paternal line on WikiTree: 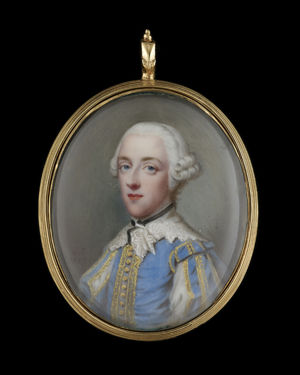