Lord Amelius Wentworth Beauclerk was the son of William Beauclerk, 8th Duke of St. Albans, and was the twelfth of his parents' thirteen children. He was a great-great-great-grandson of King Charles II by Charles's mistress Nell Gwyn.

In 1853, he married Frances Maria Harrison. Together they had seven children.

Is Amelius your ancestor? Please don't go away!

ask our community of genealogists a question.
Sponsored Search by Ancestry.com
DNA Connections
It may be possible to confirm family relationships with Amelius by comparing test results with other carriers of his Y-chromosome or his mother's mitochondrial DNA. Y-chromosome DNA test-takers in his direct paternal line on WikiTree: It is likely that these autosomal DNA test-takers will share some percentage of DNA with Amelius: 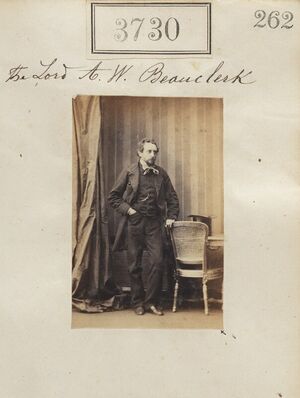