Lord George Beauclerk was a member of the aristocracy in British Isles.

Lord George Augustus Beauclerk was born 14 December 1818, the son of William Beauclerk, 8th Duke of St. Albans and his second wife Mary Janetta (nee Nelthorpe), and was the youngest of his parents' thirteen children. He was a great-great-great-grandson of King Charles II by Charles's mistress Nell Gwyn.

He purchased a commission in the British Army, serving in the 10th Hussars Regiment (The Prince of Wales Own Royal Regiment of Light Dragoons) as a Cornet 28 August 1838, Lieutenant 5 February 1841, and Captain 6 December 1844.[1]

ask our community of genealogists a question.
Sponsored Search by Ancestry.com
DNA Connections
It may be possible to confirm family relationships with George by comparing test results with other carriers of his ancestors' Y-chromosome or mitochondrial DNA. Y-chromosome DNA test-takers in his direct paternal line on WikiTree: It is likely that these autosomal DNA test-takers will share some percentage of DNA with George: 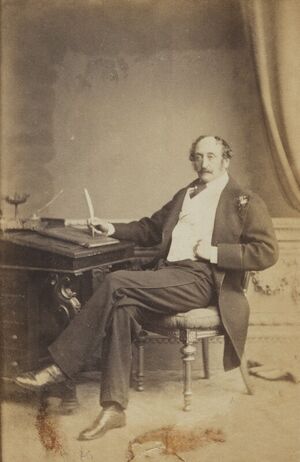