(Royal Ancestry) He died testate 27 May 1444, and was buried at Wimborne Minster, Dorset.

(Royal Tombs of Medieval England) In 1444 he died at St. Margaret's Hospital, Wimborne, near his ducal manor of Kingston Lacy, rumored to have committed suicide to avoid charges of financial corruption and inept command. The duke was buried in the hospital church standing on the site of an earlier church thought to be the burial-place of Ethelred I (d.8710, but which otherwise had no tradition of senior burial. There are no records of John Beaufort's funeral or tomb. John Beaufort has a tomb located to the south of the Wimborne Minster high altar and features a Purbeck marble tomb-chest and alabaster effigies of himself and Margaret Beauchamp. The duke's effigy Is shown wearing armor and both effigies are wearing ducal coronets. the duke's coffin apparently lies within the tomb-chest, which may have been executed soon after his death. But the single tier tomb-chest is not large enough to contain two coffins, and there is no record that Margaret was actually buried at Wimborne. In 1495 Margaret's family founded a chantry for her at Shaftesbury, but there is no record that she was buried there.

John Beaufort, 1st Earl of Somerset (c. 1373 - March 16, 1410) was the first of the four children of John of Gaunt, Duke of Lancaster, and his mistress (later his wife) Katherine Swynford. Beaufort was born in about 1373 and his surname probably reflects his birthplace, his father's Beaufort Castle in Anjou, France. The family emblem was the portcullis which is shown on the back of a 1p coin. John of Gaunt had his nephew Richard II of England declare the Beaufort children legitimate in 1390, with the important proviso that they were barred from the succession to the throne, despite being the grandchildren of Edward III of England. It is thought that this may have been a "private" act (that is, not entered in the public records), because, in January 1397, the Duke had Parliament issue a similar declaration, with the same proviso. Later that month, Gaunt married Katherine although they had been living apart for some years, possibly in order to have their children publicly declared legitimate. While this legal wrangling ultimately caused an enormous amount of bloodshed and destruction, it did result in one of the Beaufort descendants ascending the throne as Henry VII.

John Beaufort was created Earl of Somerset on February 10, 1397. On September 28 of that year he married Margaret Holland, daughter of Thomas Holland, 2nd Earl of Kent; the next day he was created Marquess of Somerset and Dorset. Also sometime that year he was made a Knight of the Garter. He lost the two marquessates in 1399 after the accession of Henry IV. In 1404 he was Constable of England.

He and his wife had six children: 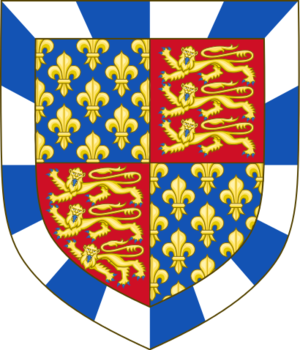 Duke and Duchess of Somerset 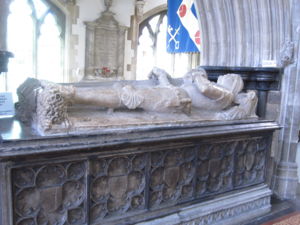 Leave a message for others who see this profile.
There are no comments yet.
Login to post a comment.
RJ Horace
The Wikipedia article in the Notes is for this John's father. This John is

John is 19 degrees from Donald Howard, 15 degrees from Julia Howe and 3 degrees from Henry VIII of England on our single family tree. Login to find your connection.

Categories: Knights Companion of the Garter | House of Beaufort