Father of Charles (Beaufort) Somerset KG
Died 15 May 1464 in beheaded by the Yorkists at Hexham, Northumberland, England

(Royal Ancestry) He commanded the Lancastrian army at the Battle of Hexham in Northumberland 15 May 1464, where he was defeated and captured. Henry Beaumont, 3rd Duke of Somerset, was beheaded by the Yorkists at Hexham the same day as his capture. His mistress Joan Hill, was granted an annuity of 10 marks by King Henry VII in 1493.

(Royal Tombs of Medieval England) henry Beaufort's eldest son, Henry, fought with the victorious Lancastrian army at Wakefield in 1460, and the defeated Lancastrians at Towton the following year. He escaped from Towton to Bamburgh Castle, but later surrendered to Edward IV. In 1464, the duke raised an army to support the restoration of Henry VI, but was defeated at Hedgeley Moor in Northumberland (25 April) and Hexhm, also in Northumberland (10 May). Henry Beaufort was executed after the battle of Hexham and buried in the priory church. There is no record of a monument, although a brass matrix recorded in the eighteenth century may have come from his tomb.

Henry Beaufort is listed in Douglas Richardson's Magna Carta Ancestry (Vol. IV, p. 49, SOMERSET 10) as in a prospective Magna Carta trail from Gateway Ancestor Maria Johanna (Somerset) Smith to Surety Baron Saher de Quincy. This trail has not yet been developed by the Magna Carta Project. For information about the trail, see the Magna Carta Section of the profile of his son Charles. 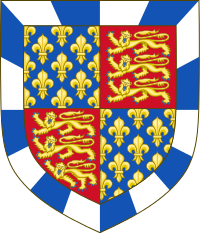 Michael Cayley
Henry Beaufort is in a prospective trail from Gateway Ancestor Mary Johanna Somerset to Magna Carta Surety Baron Saher de Quincy. I am therefore adopting this profile on behalf of the Magna Carta Project. Any questions, please get in touch. Thanks.
posted on Somerset-10 (merged) Jul 31, 2020 by Michael Cayley

C. Mackinnon
Is there good reason why his LNAB is Somerset?
posted on Somerset-10 (merged) Jan 20, 2019 by C. Mackinnon

Liz (Noland) Shifflett
Good question. Richardson has him as Henry Beaufort, 3rd Duke of Somerset. Charles, his illegitimate son, is listed as Somerset by Richardson but the ODNB bio for him has Somerset "formerly Beaufort", which implies born Beaufort and picked up Somerset as surname during his lifetime (I cannot access the full ODNB bio - https://doi.org/10.1093/ref:odnb/26004 - requires subscription).
posted on Somerset-10 (merged) Jul 31, 2020 by Liz (Noland) Shifflett

Michael Cayley
There is no reason why the last name should be Somerset. Duke of Somerset was a title not a name.
posted on Somerset-10 (merged) Jul 31, 2020 by Michael Cayley

Henry is 19 degrees from Laurie Giffin, 31 degrees from Toni Morrison and 5 degrees from Henry VIII of England on our single family tree. Login to find your connection.