The 1900 Census finds Bill and Norah living in Jonesboro, Craighead County, Arkansas, with the first three of their children, Samuel, Eugene, and Hugh. [2]

Bill and Norah were the parents of the following children:

According to his Death Record, Bill was living with his family at their residence at 244 Oriental Street, San Antonio, Texas when he died April 21, 1927, at sixty-one years of age. The length of residence in the city or town where death occurred (San Antonio) is 14 years, indicating that he moved there in 1913. William was employed by the government, in a civil service capacity. [4] William is buried in the Mission Burial Park, at 1700 S.E. Military Drive, San Antonio, Bexar County, Texas, 78221. [5]

The Find A Grave memorial indicates that William was born in Dent County, Missouri, however, his family was living in St Joseph, Missouri at the time of his birth, (see his father's profile) and his birthplace on his death record is St Joseph, Missouri. (see image) 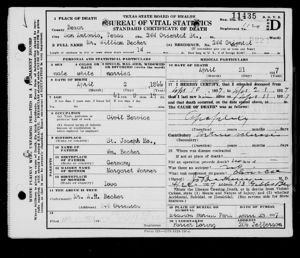 William is 20 degrees from Peter Roberts, 16 degrees from Emma Smith and 19 degrees from Henry VIII of England on our single family tree. Login to find your connection.