Thomas Bell was a Virginia colonist.

"16 Junij 1635 - The under-written are to be transported to Virginia embarked n the Thomas & John, *Richard Lambard Mr, being examined by the Minister de Gravesend concerning their *conformities to the orders & Discipline of the Church of England: And took the oath *of Allegiance."[3] Alphabetical order:

Thomas married only once. His wife's given name was Mary, as she is named in his will. There is some dispute about his wife. Most sources located state she is Mary Neal, daughter of Capt. John Neal. (See attached photo on this profile.) Some family trees state she was Mary Harrington, based (it appears) solely on the fact that one land grant for Thomas Bell adjoined that of Edward Harrington. I am inclined to the opinion that her name was Mary Neal. Further research is needed to confirm this.


Thomas and Mary probably married about 1650 in Northampton County, Virginia (became Accomack County in 1661). Known children (named in his will) include:

Thomas wrote his will on 6 July 1678 at Northampton County, Virginia, it was proved 10 December 1678. Abstract of will posted on ancestry.com:[8]

To my son Thomas Bell my 250 A. plantation where I now live.
To my son Thomas 350 A. in Northampton Co. on the seaboard side near Matchepungo as mentioned in my pattent dated 20 Oct. 1661 subscribed by Francis Morryson and Thomas Ludwell.
To my son Thomas my handmill.
To my sons William and Robert Bell 300 A. which belongs to the land I now live upon to be eq. div. as they themselves have agreed.
To my son George Bell one shilling and I hereby disinherit him from any part of my land.
To my dau. Elizabeth Giddins now the wife of Thomas Giddins one shilling.
To John Giddins the youngest son of my dau. Elizabeth, one heifer.
To my loving wife Mary Bell her full 1/3rd of the remainder of my cattle, and the remaining 2/3rds to be eq. div. by my children Thomas, George, William, Robert, and Anthony Bell, my dau. Mary Maddux, and my granddau. Elizabeth Gethings.
Wife Mary extrx. and to dispose of remaining estate as she sees fit.
Witt: Morgan (an unknown value) Dowell, Thomas Barton, John Burroughs.[9] [10][11]

He has been detached from Robert Bell and Alice Colston as parents, due to lack of evidence. That family was in Norfolk. See G2G discussion https://www.wikitree.com/g2g/952128/review-needed-of-bell-family-of-norfolk?show=954025#c954025 and comment/discuss there before adding parents. The Thomas I was writing about was 19 when he came to America. 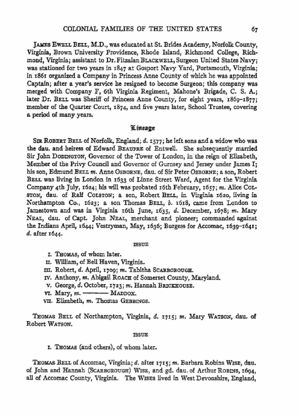 Shirley (Strutton) Dalton
This profile is being reviewed on behalf of the US Southern Colonies Project for sources and documentation. As far as I can find out, Thomas had only one wife. Is there documentation for more than one? Do we have the correct name for her?

Edit: Alice (Unknown) Beale was not a wife of Thomas Bell. She was the wife of Col. Thomas Beale (abt 1625-aft 1668) of Rappahannock/Richmond County, Virginia. She and her attached children-- Thomas Beale, Unknown Beale, Ruth (Beale) Tiplady -- are being removed as wife and children of this Thomas Bell.

Shirley (Strutton) Dalton
Mary (Williams) Stevens is being removed as wife of Thomas Bell. Her birth/death dates mean she would have died at the age of 97, not believable. In addition, she is also linked to John Stevens as wife. He appears to have lived in Maryland. And he has the same unbelievable birth/death dates. No documentation that Mary Williams was married to Thomas Bell and someone should really do some research on John Stevens and Mary Williams.
posted Jun 28, 2021 by Shirley (Strutton) Dalton

Darlene (Athey) Athey-Hill
Family trees are not reliable sources unless they have primary sources attached for the information provided within.
posted Dec 11, 2019 by Darlene (Athey) Athey-Hill
[Living Snyder]
https://www.familysearch.org/ark:/61903/2:2:34YS-DVBare profiles on FamilySearch for the family of Thomas Bellhttps://www.familysearch.org/ark:/61903/2:2:34YS-DVB

Darlene (Athey) Athey-Hill
Please see and respond to the G2G discussion, where Andrew and RJ discuss that Thomas' parents are unknown. Suggest that parents be detached with note in biography. https://www.wikitree.com/g2g/952128/review-needed-of-bell-family-of-norfolk
posted Dec 11, 2019 by Darlene (Athey) Athey-Hill
[Living Snyder]
Many of the sources are not working or available
posted Dec 07, 2019 by [Living Snyder]
[Living Tuttle]
Trying to prove Thomas Bell born 1618 had a son Roger Bell born abt. 1650. I have many records for Thomas Bell but cant seem to contact.