The primary founder of the State of Israel and the first Prime Minister of Israel.

Born in Płońsk in Congress Poland - then part of the Russian Empire. His father, Avigdor Grün, was a lawyer and a leader in the Hovevei Zion movement. His mother, Scheindel, died when he was 11 years old.

Settling in New York City in 1915, he met Russian-born Paula Munweis (1892-1968). They were married in 1917. Ben-Gurion and his family returned permanently to Palestine after World War I following its conquest by the British from the Ottoman Empire. David and Paula Ben-Gurion had three children: a son, Amos, and two daughters, Geula Ben-Eliezer and Renana Leshem. Paula is buried with her husband in Midreshet Ben-Gurion. He married Mary Callow, an Irishwoman who had converted to Judaism. Amos and Mary Ben-Gurion had two daughters and a son, and six granddaughters. Geula had two sons and a daughter, and Renana had a son. On 18 November 1973, Ben-Gurion suffered a cerebral hemorrhage, and was taken to Sheba Medical Center in Tel HaShomer, Ramat Gan. His condition began deteriorating on 23 November, and he died on 1 December at age 87. 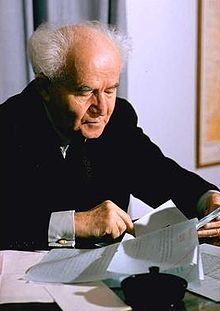