Richard Bennett Sr is a Qualifying Ancestor of the Jamestowne Society

Crest: Out of a mural coronet or, a lion's head gules, on the neck of a bezant.[1]

Richard Bennett was a nephew of Edward Bennett, a wealthy merchant of London and member of the Virginia Company. [1]

On November 21, 1621, Edward Bennett, a rich merchant of London, was granted a patent for a plantation upon the condition of settling two hundred emigrants. Associated with him in that patent were his brother, Robert Bennett, and his nephew, Richard Bennett, Thomas Ayres, Thomas Wiseman and Richard Wiseman; and in February, 1622, the "Sea Flower" arrived with one hundred and twenty settlers, under command of Captain Ralph Hamor, one of the Council. Among them were Rev. William Bennett and George Harrison, kinsmen of Edward Bennett. Their place of settlement was called Warrosquoyacke, or sometimes "Edward Bennett's Plantation," and was located at the place on James River known as the "Rocks," the estate of the late Dr. John W. Lawson, who for many years represented this county in the General Assembly of the State, the Second Congressional District in Congress, and this county in the late Constitutional Convention.[4]

Bennett had a plantation on the Nansemond River called Bennet's Welcome. [5]

It is known that three of his uncles ( Edward Bennett, merchant; Richard Bennett, and Captain Robert Bennett) all of London had founded a plantation in Virginia called "Bennet's Welcome:, and had spent some time in the new settlement.[6]

On the day the patent last mentioned was granted, Arthur Swaine, Captain Nathaniel Basse and others, undertook to establish another plantation in the same neighborhood. Captain Basse came over in person and his plantation was known as "Basse's Choice," and was situated on Warrosquoyacke (now Pagan) River. The houses of Captain Basse's Plantation were building when a great calamity happened to the infant colony. At midday on Good Friday, March 22, 1622, there were twelve hundred and forty inhabitants in the State of Virginia. Of these, three hundred and forty-seven, in a few hours, were killed by the Indians in the eighty settlements on the north and south sides of the James River, of which number fifty-three were residents of this county. [4]

Yours Out of the John and Frances.

The census of 1623-24 (February) showed as then living at "Worwicke-Squeak" and "Basse's Choice" fifty-three persons, "twenty-six having died since April last." Among those who had died were Mr. Robert Bennett, the brother of Edward Bennett, the rich London merchant, and first minister, Mr. William Bennett, doubtless one of the same family. [8]

In England, King Charles-I and his Army was defeated at Marston Moor in 1644.

1649 Trial and Beheading of King Charles

The trial and beheading of King Charles-I was in 1649, and Virginia remained loyal to the crown.

He returned to Virginia and in 1651 was appointed by Parliament one of the Commissioners to reduce Virginia and Maryland. He was Governor of the Colony from 30 April, 1652, to March, 1655. In 1658 he was again a member of the Council. [1]

Richard Bennett, William Claiborne and Edmond Curtis were instrumental in writing & signing a document with England that made "VA almost as free and independent as she was after the Revolutionary War."[6]

He was elected Governor of Virginia and when Maryland was on the verge of war with the Indians, he headed a peace mission to them and arranged a satisfactory treaty. He was re-elected Govenor 3 successive terms and was sent as Comissioner to England by the House of Burgesses. [6]

He came back to Virginia in 1652 when Oliver Cromwell named him governor, after Cromwell deposed Charles I as King of England. [5]

1652 Articles of Surrender to Commonwealth

Articles of surrender in 1652 to the Commonwealth of England was agreed to by the House of Burgesses. The same year, Richard Bennett was elected Governor by the General Assembly replacing William Berkeley. Oliver Cromwell ignored Virginia and self-government went serenely on in '53, and Westmoreland County was created out of Northumberland County. [10]

1652 Parliamentary Commissioners over Virginia and Maryland

In 1652, William Clayborne and Richard Bennett (a Puritan from Nansemond County, Virginia) were appointed Parliamentary Commissioners over both Virginia and Maryland by the new Commonwealth of England Following the execution of Charles I in 1649, Maryland, not surprisingly, remained steadfastly Royalist, but for once she and Virginia were on the same side of the fence, as Virginia, too, continued to favor the monarchy (a considerable number of Royalists having removed to that Colony during the Civil War). Clayborne moved swiftly, and on the 5th of April 1652, a petition was signed by residents of the Isle of Kent 5th April 1652: promising to be true and faithful to the Commonwealth of England, without King or House of Lords. [10]

He was then sent as Commissioner to England by the House of Burgesses. [9]

Returning to Virginia in 1658 he was re-elected to the Counsel each year until his death. [9]

Returning to Virginia in 1658, he was re-elected to the council each year until his death. From 1662-72, he was Major-General of the forces in Virginia.[6]

In 1666 he was a Major-General of Militia, and in the "Sainsbury Abstracts" we find that in that year Thomas Ludwell, writing to Bennett, Lord Arlington, states that Major-General Bennett bore his (Arlington's) arms, and was he believed of his family. [1]

He was a friend of the Friends (Quakers) for the rest of his life. [5]

When he died in 1675/6 he willed 2000 lbs of tobacco to each of four Nansemond Quaker neighbors. Two Quakers were among the executors of his will. [5]

William Bennett married Mary Ann Utie, and they had the following children: [1]

Robert Bennett, a brother of Edward Bennett of London, also came to Virginia prior to January, 1623-4, and in 1648 Mr. Philip Bennett, administrator of Robert Bennett, had a grant of land in Nansemond county. [1] 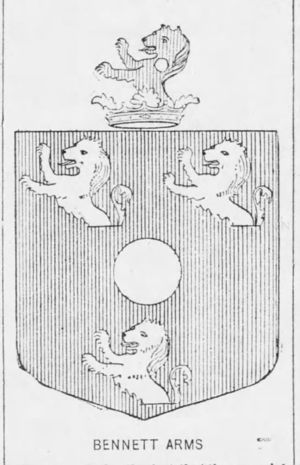 Jack Day
Lisa, please agree to the proposed merge, since Bennett-1181 is the lower numbered profile and the detailed information about Richard Bennett and his family is there! Thanks.
posted Jun 05, 2016 by Jack Day

Jack Day
Bennett-11207 and Bennett-1181 are not ready to be merged because: Birth and death locations disagree. Birth location should be the one in England as birth in Virginia that early is unlikely. Death location needs to be researched and resolved before merge.
posted Oct 05, 2015 by Jack Day

John Elkin
Bennett-11207 and Bennett-1181 appear to represent the same person because: they have the same birth and death dates, and title of Governor
posted Oct 05, 2015 by John Elkin

Jack Day
Bennett-10817 had a birthdate 50 years before Bennett-1181 which would have been reason to reject the merge. However, the earlier date was nonsensical and would have had Bennett living to well past 100. So I changed the dates, made them compatible, and merged them. Now the bio narrative needs to be revised into one coherent whole, using inline sources so that one knows where each piece came from!
posted Jul 20, 2015 by Jack Day

Liz (Noland) Shifflett
I believe the text is already in the bio, but see p 206:

Richard is 20 degrees from Danielle Liard, 14 degrees from Jack London and 11 degrees from Henry VIII of England on our single family tree. Login to find your connection.