It is believed that Caleb and his first wife Sarah Brooke were married on March 26, 1791 in Indian Springs, Frederick County, Maryland. [4] and [5]

Caleb was a silversmith, shopkeeper, and first postmaster in Brookeville, Maryland. Bentley was born in Chester County, Pennsylvania in 1762.[6] In the early 1780s, Caleb emigrated with his brother, spending some time in York, Pennsylvania and then moved to Leesburg, Virginia in 1786. While in York, Bentley became a Quaker. In the early 1790s, Bentley established himself as a silversmith in Georgetown, Washington, D.C.[7]

"Caleb Bentley was the brother of Eli. Only two sources have been discovered giving the facts on Caleb. Dr. James states that "he tried his trade in New York, Pa., later at Leesburg, Va. and finally settled in Sandy Spring, Md." History of the Bentley family was given by John N.[eedles] Bentley of Sandy Spring, Maryland, at a meeting of the council of the Carroll County Historical Society in Taneytown, October 10, 1946. Caleb was born in 1762, near Doe Run, Chester County, Pennsylvania, and became a great clockmaker who eventually settled in Montgomery county, Maryland, in 1794 and was well-to-do.[8]

Caleb Bentley was commissioned by President George Washington to make the brass cornerstone used for the White House groundbreaking ceremony in 1792. A year later, Bentley made a silver cornerstone which was used for the United States Capitol.[9] [10]

Bentley's wife, Marie Henrietta Thomas, was a close friend of Dolley Madison. In August 1814, during the War of 1812 when President James Madison fled Washington, D.C., he fled to Brookeville on horseback, where he found refuge in the home of Caleb Bentley.[11] [12] Mrs. Mary Bentley Thomas, a granddaughter, made a record of this visit. She relates that the President only asked for a room for his officers, and her grandmother's private room was set aside for them. The President did not retire at all, but sat all night in the armchair, with a secretary table upon it, from which he dispatched orders throughout the night. There was a guard of soldiers surrounding the house, and their continual tramp destroyed Mrs. Bentley' s vegetables and flowers. The chair in which President Madison sat during that eventful night long remained and honored heirloom in the home of her father, and, upon his death of her mother, it became the property of Mr. Richard Bentley, of Baltimore. Next morning, after having received evidence that the British were marching to their vessels, President Madison bid goodbye to his Quaker host, and returned to his desolated capital."[13] Today Caleb's house is know as the "Madison House"

The Bentleys continued to live in Montgomery County for years, though he returned to live for a period of time in Georgetown in the late 1830s. Bentley died in 1851 in Sandy Spring, Maryland.[15]

The place of birth and the ages of the Children of the existing profile of Sarah Brooke indicate she is not Caleb's wife.

Sarah Brooke was born on December 29, 1767, daughter of wealthy landowner Roger Brooke IV. Sarah married Caleb Bentley in 1791. Although they had no children, the couple raised an orphaned child and a young African American girl until Sarah's untimely death on September 9, 1805.[16] and [17]

Is Caleb your ancestor? Please don't go away!

ask our community of genealogists a question.
Sponsored Search by Ancestry.com
DNA
No known carriers of Caleb's DNA have taken a DNA test. 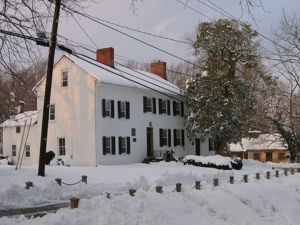