He was living with his parents and siblings at Abbey Road, Hampstead, Middlesex, England in 1891[2]

He was with his sisters in Hampstead, Middlesex, England as a student studying law 1901[3]

He was living with his parents and sibllngs in Hampstead , Middlesex, England and he was working as a barrister at law and journalist in 1911[4]

He was a delegate at the annual Zionist Congresses from 1907-1912 and he He paid his first visit to Palestine in 1908. He also played a major role in the development of Palestinian law. He married Helen Caroline Franklin on 7th September 1915 in Paddington, London, England[5]

In 1929 he was barred from representing the government at the Shaw Commission into the August riots. In August 1931 his appointment as Attorney-General was terminated by the Under-Secretary of State for the Colonies, who cited "the peculiar racial and political conditions of Palestine, and the difficulties with which the Administration has in consequence to bear.

President of the Hebrew University of Jerusalem, Jewish Publication Society, 1954.

Is Norman your ancestor? Please don't go away!

ask our community of genealogists a question.
Sponsored Search by Ancestry.com
DNA
No known carriers of Norman's ancestors' DNA have taken a DNA test. 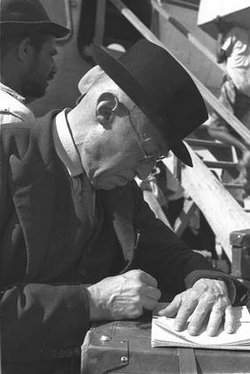