Michelarcangelo's family is closely connected to mine. In Casalvecchio, the Bergantinos and the Andreolas both lived on Cairoli Street. Among the descendants who moved to Milford MA, note that my Grandparents (Michele Andreola-6 & Louise Fino-7) and Michelarcangelo's daughter Arcangela Bergantino-11's family (the Palmas) were next door neighbors on Beach St. Extension in Milford.

See photo. Michelangelo is travelling with Demetrio Rossacci-17. They were brothers-in-law when Giuseppantonio Rossacci-15 was married to Arcangela Bergantino-2. They are both going to Milford, Massachusetts. Demetrio to stay with his 'brother-in-law', M. Calzone; Michelarcangelo with his 'brother-in-law', M. Iacovelli--both of whom share the same (can't quite read it) street address.

Michelarcangelo & Demetrio took an unusual route through Rotterdam, Holland. Most of the folks from Casalvecchio traveled from Naples.

Michelarcangelo apparently made other trips to America--see his daughter, Maria Annunziata's, birth record that states he was in America in 1908

All I have are the references on his daughter, Arcangela's, USA immigration form stating that he was alive and in Cascalvecchio in 1917 and his son, Francesco's, repeating that in 1921.

Is Michelarcangelo your ancestor? Please don't go away!

ask our community of genealogists a question.
Sponsored Search by Ancestry.com
DNA Connections
It may be possible to confirm family relationships with Michelarcangelo by comparing test results with other carriers of his Y-chromosome or his mother's mitochondrial DNA. However, there are no known yDNA or mtDNA test-takers in his direct paternal or maternal line. It is likely that these autosomal DNA test-takers will share some percentage of DNA with Michelarcangelo: 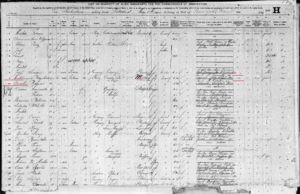 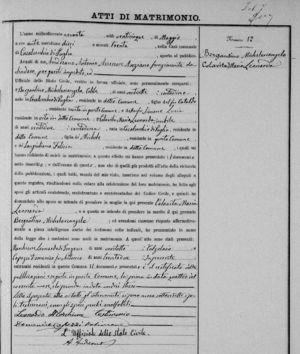