Ingrid Bergman was born in Stockholm 29 August 1915, the daughter of Justus Samuel Bergman and his wife Frieda Henrietta Augusta Louise.[1] Frieda ("Friedel") Adler was from Kiel, Germany. At least two children had died in infancy before Ingrid was born.[2] Justus Samuel Bergman lived at Strandvägen in Hedvig Eleonora parish, from 1914 to 1924, the period during which Ingrid was born.[3]

In 1933, Ingrid concluded her schooling at the Lyceum for Girls in Stockholm and was accepted as a student in the Swedish Royal Dramatic Theatre Academy. After a year of study there, she took her first role in a film, and left the Theatre Academy to pursue a film career. During the 1930s, she made eight films in Sweden and one in Germany.[4]

Ingrid Bergman met and married her first husband, Petter Lindström, in 1937. She was 21 and he was 30 at the time. They had one child together, a daughter named Friedel Pia Lindström, on 20 September 1938. Ingrid traveled to the United States to star in Hollywood productions, and Petter and Pia remained in Sweden. At the time of the census 1940 Ingrid and her family were still registered in Sweden. The household included a nanny and a housekeeper. Ingrid Bergman was registered as an actress, employed by Selznick International Pictures.[5]

By 1940, Petter and Pia moved to Rochester, New York while Ingrid acted on Broadway and in Hollywood.[6]

Ingrid's marriage to Petter ended in a bitterly contested divorce after she began an affair with Italian film director Roberto Rossellini, who directed her in the 1950 movie Stromboli. She married Rossellini in 1950. They had a son together before their marriage and later had twin daughters. Their marriage was annulled in 1960, a few years after Rossellini began a long relationship with Indian actress Sonali Senroy Dasgupta.

Her third husband was Lars Schmidt, a Swedish businessman and theatrical producer.[6] That marriage ended in divorce.

Is Ingrid your ancestor? Please don't go away!

ask our community of genealogists a question.
Sponsored Search by Ancestry.com
DNA
No known carriers of Ingrid's DNA have taken a DNA test. 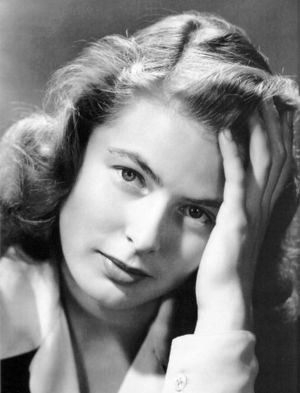 Picture of Ingrid Bergman's grave at Norra begravningsplatsen in Stockholm 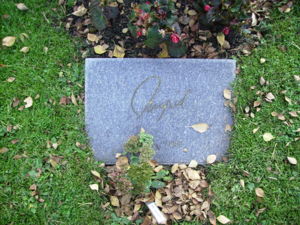 We plan on featuring Ingrid as the Example Profile of the Week in the Connection finder on February 24th. Between now and then is a good time to take a look at the sources and biography to see if there are updates and improvements that need made, especially those that will bring it up to WikiTree Style Guide standards. We know it's short notice, so don't fret too much. Just do what you can. A Team member will check on the profile Tuesday and make changes as necessary.