Called "Golden Voice" by Victor Hugo, and "Divine" or the "Empress of the Theater", by others, regarded by many as one of the greatest French actresses of the 19th century. The first international star, Sarah Bernhardt was the first actress to successfully tour five continents. Beauty and the Beast author Jean Cocteau invented the term "superstar" to describe her impact on popular culture. [1]

Like her mother before her, in 1864, Sarah gave birth as a single woman in charge of her own destiny. Her only child, Maurice Bernhardt, was fathered by Charles Joseph Eugène Henri Georges Lamoral de Ligne, a son of Prince Eugène de Ligne, and the Ambassador of Belgium, Minister of State, President of the Belgian Senate, and Chamberlain of the Emperor of Austria.[2]

In 1882, Sarah wed the son of an illustrious Greek family, diplomat-cum-actor Aristide Ambroise Damalas, whose stage names were Jacques d'Amala and Jacques Daria. Damalas became a naturalized French citizen. The couple lasted together but a year, but did not divorce. Damalas later met an unfortunate early demise, as so many aristocrats of his day did, due to morphine addiction. Thereafter, Sarah was known to style her signature as "Sarah Bernhardt, veuve Damala"; she sculpted a great work of art in marble, installed at The Met, in homage to her lost love. [3]

"Toured the world in the costume of Phaedra, she slept in a coffin, she collected wild beasts and lovers... all this is true! Well, almost... in her case, the legend she has built is not far from reality. Let's meet a great lady who has become famous all over the world, thanks to her immense talent, but also her sense of image and her insatiable thirst for life... " [4]

"Perhaps the most famous actress of all time, Sarah Bernhardt is regarded as one of the finest actors of the 19th century, appearing on the stage and in some of the earliest films ever produced." Born illegitimately to a Jewish mother, a courtesan, " young Sarah, seen as a burden to her mother, was eventually sent to be raised in a convent. Bernhardt wanted to become a nun, but the Duke of Morny, who was one of her mother's lovers and Napoleon III's half-brother, thought she should instead be an actress and arranged for her to enter the Paris Conservatoire at age 16. At the Conservatoire, Bernhardt was far from a star pupil, and left in 1862..." [5]

"Although she was a sincere if hardly devout Catholic, there was never a question of her forgetting that she was also a Jew... The virulent anti-Semitism that broke out during the Dreyfus affair inspired the most ugly vilifications... in 1898 a notorious anti-Semitic book—Les femmes d'Isreal—proclaimed that 'whether initiated into the worship of God by Gemara or by the catechism, Sarah Bernhardt is neither more nor less than a Jewess, and nothing but a Jewess.' ...Her patriotism had always been unimpeachable, as she had demonstrated during the 1870 war... proudly proclaimed 'I am a daughter of the great Jewish race,' but she also felt herself French to the core." [6]

"The French actress Sarah Bernhardt, named by her fans the 'Divine Sarah,' is recognized as the first international stage star. Bernhardt played some seventy roles in one hundred and twenty five productions in Europe, the United States, Canada, South America, Australia and the Middle East. She managed several theaters in Paris before leasing the Théâtre des Nations, which was renamed Théâtre Sarah Bernhardt (today Théatre de la Ville)... Sarah Bernhardt was born as Henriette Rosine Bernard to the Dutch Jewish courtesan Julie Bernard (?–1876, also referred to as Judith and as Youle in the biographies), on October 23, 1844. Her original birth certificate is lost and biographers also note the day before as her birth date. Julie was the daughter of Maurice Bernard (also noted in documents as Bernardt), an oculist, and of Jeannette née Hart (noted also as Hard, or van Hard). Sarah was the eldest of Julie’s three illegitimate daughters; the second was Jeanne (1851–1900) and the third was Régine (1853?–1874). It is not clear who was Sarah’s father. It is assumed that it was a young student named Morel who pursued a career as a naval officer. Her uncle Edouard Bernard signed as her father in her baptism certificate when Bernhardt was thirteen. She spent her childhood in a pension, cared for by a hired nurse, and in Grandchamp Augustine convent school near Versailles. Her mother was absent most of the time. Given her religious education she wanted to become a nun. Yet when she turned sixteen, her mother’s lover Charles Duc de Morny (1811–1865), the illegitimate half-brother of Napoleon III, designated for her a career in the theater... " [7]

"A formidable senior actress, Madame Nathalie , had shoved Sarah's youngest sister, Régine, against a pillar backstage for stepping on her train. Sarah, enraged, had slapped Mme Nathalie's face and then refused all appeals to apologize... Sarah resisted family pressure to marry a rich, elderly suitor. But she still needed Julie's connections... hat is certain is that on December 22, 1864, she gave birth to a son, Mauríce, whose father was a young Belgian aristocrat, Henri, Prince de Ligne. For him to marry an actress was out of the question: at that time, they were only a little more "respectable" than courtesans since they were mostly poorly paid and thus expected to be supported by wealthy patrons in return for their "favors." Sarah lavished on her son Maurice all the love she had wanted from her mother; for the rest of her life, she backed his runaway spending without complaint, even when it meant selling her personal possessions...."[8]

Considered the premiere actress of her time, perhaps of all time. Sarah Bernhardt was so much more. Overcoming her mother's rejection and a difficult childhood, much of it spent in a convent (where she requested to enter the sisterhood); Sarah evolved into the world's first "superstar" and a highly-acclaimed sculptor and painter. A writer, director, and a tragically widowed mother; in 1915, Sarah also became an amputee, medically attributed to recessive tuberculosis, complicated by a 1905 knee injury in South America, acquired in a stage mishap while performing La Tosca. [9]

"Some time before she had her leg amputated she confessed to me how much it troubled her. 'Will it not interfere with your work?' I asked. 'I am in terrible pain every hour of the day,' she answered. 'But only death can stop me acting' -- and she said it with a pain-twisted smile on her face." [10] 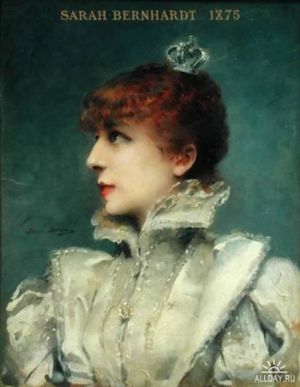 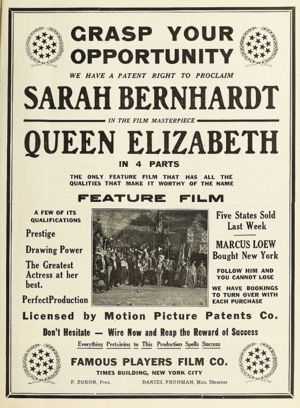 Sarah Bernhardt and the theatre she managed. 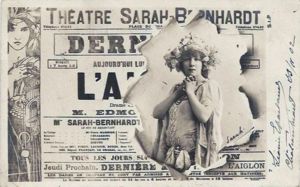 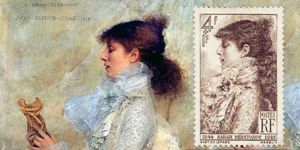 Sarah is 24 degrees from Jaki Erdoes, 22 degrees from Wallis Windsor and 23 degrees from Henry VIII of England on our single family tree. Login to find your connection.