He said that he left home at age 14 during a church service that was being held in his home, and never went back. He said he worked "here and there," after that, and eventually boarded a boat, got off at Duluth, Minnesota, where he found work. Eventually he went to Forest Lake, Minnesota, where he met and married his wife Henriette Rioux.

His daughter later wrote, "In 1906 a cousin of ours in Forest Lake noticed that someone was advertising in newspapers, trying to locate a missing John Wilson, to settle a Mich. Estate. When she wrote and told us, he was very upset. Said it wasn’t him. After that he wouldn’t be serious when [our mother] questioned him. He would say he did not come from Michigan. He came from “Pennsyltucky.” Finally when being asked he become angry and roared – “Don’t ever ask me about that again.” It was a forbidden subject thereafter." --Letter from Aunt Eva, 1962

DNA matches suggest a strong relationship to a Weed family from Maine that settled in Western Michigan, possibly in or near Allegan County. Update 2019: Recent analysis indicates that all of John Wilson's descendants who have taken DNA tests have a strong connection to this Weed family.

Her gravestone does not record her date of death and date of birth is incorrect; dates here are from her death certificate signed by son Orlando.

Is Myra your ancestor? Please don't go away!

ask our community of genealogists a question.
Sponsored Search by Ancestry.com
DNA Connections
It may be possible to confirm family relationships with Myra by comparing test results with other carriers of her mitochondrial DNA. However, there are no known mtDNA test-takers in her direct maternal line. It is likely that these autosomal DNA test-takers will share some percentage of DNA with Myra: 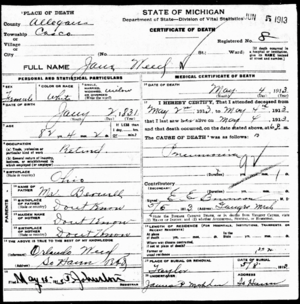 Kay Wilson
Thanks, Mary. I am working my way through the Weeds I had posted earlier before I discovered my relationship to them via John F Weed. I will try to get the earlier posts updated in the near future.