Jaynath was born on 29 January 1896, the auspicious day of Maghi Purnima (16th Magha, 1302), in Bajitpur, a village in Faridpur District in undivided India (presently in Bangladesh). His father, Bishnu Charan Bhuinya (Bhuia) one of the mostly upper class Brahmins and Kayasthas who inhabited the village, was a very pious Kayasthas, orthodox, and well-loved and respected person. His mother Saradadevi, "a worthy conjugal partner and echoed love, simplicity, sympathy and affection she imbibed from her husband. She was an idol of purity" (Mukhopadhyay, 1996, Ch.3). The family Deity was Lord Shiva, who told her in a dream “I am coming to your lap as your son to fulfill your desire”. She passed this on to her husband; little did they know how the boy would become so important in the resurrection of the Hindu faith, materialising dreams of Swami Vivekananda Datta-20.

As a little boy he became known to the village people as 'Budha', and then 'Binode' after his initiation (about age 11?). He loved everybody, animals and insects too, never indulged in any mischief or malpractice, had very little urge for food or play, was calm and composed, and was protected from people who were not in harmony with him by his elder sister Hemangini, even into later life as a Swami. Occasionally, as a boy, he would sit under a tree or on a wooden platform and meditate, from at least as young a 5 years old, a practice that grew and grew as he grew up. Also as a boy it seemed that nothing was impossible for him, even though his physical strength would appear to be limited. It indicated in him a strong resolution that persisted into later life, as well as being popular among the children because of his helpful nature[1].

Although he went to the village school and followed that up by attending the Rajkumar-Edward Memorial High English School, he knew instinctively that that form of education was not for him, his contemplative nature taking his mind away from the rote form of study, and he would often remain in the classroom long after everyone had gone home. The teachers loved him knowing he was exceptional, and he would bring good conduct prizes home.

His life as an ascetic also began at a young age, for example taking only rice, salt and boiled potato, and practicing different exercises every day he still became uncommonly stout and strong (Mukhopadhyay, 1996, Ch.3).

In 1913 Binode was a student of class X at Bajitpur High School, where Sri Birendralal Bhattacharya, who had been initiated by Gambhirnathji at the esteemed abbey of Gorakhpur, became Head Master in that year. When Binode, frustrated by his failure to achieve his goal to help the degenerate youth of Bengal, Birendra Babu suggested he meet with Yogiraj Baba Gambhirnath’ji Maharaj, spiritual head of the 'Nath community'. A meeting was arranged, which Binode did not attend as he wished to see whether Gambhirnathji would contact him as proof to Binode that Nathji was meant to be his Guru, which is what happened. Nathji initiated him with the necessary mantra and tantra as Brahmachari Binode but declined the final step to Sannyasa[2] for the moment.

He seems to have spent much time in deep meditation at Bajitpur, Gorakhpur, Banaras and back to Bajitpur never showing any interest in food, In 1916 a favourite spot for his meditation was at a temple for Bana Durga. There on the same annual full moon night that he had been born "the great illumination dawned on him with manifestation of the Divine Mission stretching far and wide before his cosmic vision". And in that ecstatic state of mind he uttered : “This is the age of mass awakening, an age of mutual unity, an age of great assimilation, and an age of great salvation.” (Mukhopadhyay, 1996, Ch.3). To fight for independence and a Hindu renaissance, encouraged by WWI of 1914.

To help accomplish his visions he founded the Bharat Sevashram Sangha organisation in 1917[3], with the Bajitpur Ashram (Hermitage) the first of many to follow. Naming of the organisation did not occur until 1923.

Dhruba Chatterjee, 2014, takes us year by year from the foundation of Swami's organisation, through its activities, to his passing in 1941, and beyond to 2017.

It wasn't until 1924 that he was formally initiated into Sannyas by Swami Gobindananda Giri, who named him Acharya Swami Pranavananda.

Many statements in Chapter 3 of Paramahansa Yogananda's "Autobiography of a Yogi" seem to imply that Swami Pranabananda was much older than Yogananda when they first met, yet the latter was born in 1893 and the former apparently in 1896. Yogananda was "my twelve years" (Ch.3, p.26), which would have been in 1905, and described Pranabananda as "A rather stout man" (op.cit.). Lahiri Mahasaya (1828-1895) was Swami Pranabananda's guru, whom he described "as the greatest yogi I ever knew. He was Divinity Itself in the form of flesh" (Ch.3, p.30). This surely implies that the Swami was born before 1896.Taken together with the observation that he was 'a rather stout man' implies at least 10 years before Yogananda.

When they first met, Yogananda asked him "Are you Swami Pranabananda?" to which "He nodded" (Ch.3, p.27). Swami initiation seems to have been given in 1924 (Prasanta Mukhopadhyay, 1996), although the most complete chronological history, so far found, first uses the term Swami in 1916 "at the age of 20 yrs".

We also find that the Swami Pranabananda of this profile was first initiated into spirituality by Yogiraj Baba Gambhirnath’ji Maharaj, whom he then recognised as his Guru and there is no mention of Lahiri Mahasaya having that role. Therefore it seems that there were two Swami Pranabanandas, one born before Yogananda and the other after. This does not seem to have been recognised by many authors and we do not have a birth year for the earlier one. He made his transition "Some time after Swami Pranabananda had visited Ranchi", which was in 1918, when they met again in the presence of Yogananda's father in Calcutta, which this Swami had predicted, and then went to the Himalayas establishing a hermitage at Rishikesh (Autobiography of a Yogi, Chapter 27).

Further investigations have brought to light sufficient information to allow creation of a profile of the earlier Swami Pranabananda Mukhopadhyay-30 although there is limited factual information on dates and relatives names.

Is Binode your ancestor? Please don't go away!

ask our community of genealogists a question.
Sponsored Search by Ancestry.com
DNA
No known carriers of Binode's ancestors' DNA have taken a DNA test. 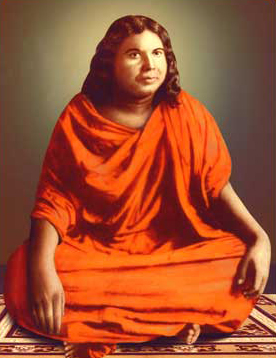