Carl Biber was born in 1837 in Crossen, Prussia (now Krosno-Odrzanskie, Poland).[1] His family lived at Frankfurt an der Oder in Germany. Carl migrated (with an Aunt - either Johanna Caroline Gottke or Johanna Louise Gottke) to Australia at the age of 18 to escape oppressive Prussian military service. Carl and Johanna arrived at Botany Bay July 27, 1855 aboard the "Gloriana" (having sailed from Plymouth, Devon, England on April 12, 1855).

The following year (1856), Carl and Johanna travelled to Melbourne aboard the S S "City of Sydney" eventually settling in Weinberg Road, Hawthorn.[2]

Shortly after arrival in Melbourne, at the age of 23 and with the intention of settling permanently within Victoria, Carl, (now calling himself Charles), applied for a Certificate of Naturalization which was granted on July 26, 1860. After taking the required Oath before The Hon. Sir William Foster Stawell, Chief Justice of the Supreme Court of the Colony of Victoria, on September 20, 1860, Charles Biber became a British Subject.

In later years, during WWI, Carl/Charles' house, named "Karlsruhe" (Carl's Rest), suffered attacks and vandalism, as a result of which the house name was removed and the street name was changed to Wattle Road (as it remains today). [3][4][5]

During this time of anti-German sentiment, two of Carl/Charles' sons, (Frederick William and Charles Theophilus), were serving in the AIF fighting the Germans in France. Frederick was killed in action in France in February, 1917.

Later in his life, Carl, (now known as Charles), lived at 5 Clive Road, Hawthorn with his daughter, Annie Helena Biber. Carl/Charles passed away in 1923 [6] leaving the house to Annie in his will to be passed on to her son, Clyde Busch. However, when Clyde married, he evicted his mother (Annie) creating a lot of bitterness in the family. Charles Biber was buried April 30, 1923 in the Boroondara Cemetery, Kew, (Plot: WES A 0700). [7]

Per the Australia death record, Charles' father's name was August.

My great grandfather, Carl Biber, arrived in Sydney, Australia (aboard the "Gloriana") in July 1855, accompanied by his Aunt, Johanna Gottke. Carl married (1861) in rural Victoria, then settled in Melbourne and raised a family of 11 children. I have found no trace of Aunt, Johanna Gottke since 1855. Can anyone help please? WikiTree profile: Charles Biber

Hi, I have done a little research and found the following a burial record of a  Johanna Lousia (Lotilsa) Gottge, perhaps the record was mistyped which unfortunately happens a lot. The details of burial notice are as follows;

Hope this helps, feel free to ask any questions and ill do my best to help out! Katrina answered Sep 14, 2012 by anonymous

Thanks Katrina, I have now sighted the Benevolent Asylum record of death and this confirms that your info from burial notice is same person - except that father's name is BIBER in their register. commented Sep 14, 2012 by Peter Knowles G2G6 Mach 6

Do you have Johanna's death certificate Peter? It should tell you how long she had been in the Australian colonies and may indicate that she arrived via another colony such as South Australia or Queensland. This might then indicate other family members on the voyage. answered Dec 26, 2013 by Jen Coates G2G1 (2k points)

Thanks Jen, Voyage and arrival is not an issue; that's all on Carl Biber's profile. Frederick Biber and Anna Stein were shown as Johanna'a parents on her death entry (in the Benevolent Home register) which suggests they are Carl Biber's grandparents. The German records are my brick wall, as no other family members came to Australia. commented Dec 26, 2013 by Peter Knowles G2G6 Mach 6

This Johanna L Gottge seems to be a daughter of Frederick Biber and Anna Stein and therefore a sister of Carl Biber's father, (possibly August Biber but yet to be confirmed). So, if she is, by that relationship, Carl Biber's Aunt, she could well have been married to Gottlieb Gottke, the occupier (from 1860) of the house at 61 Weinberg Road in Hawthorn,[8] where Carl and Mary Biber lived from about 1876 until Mary's death in 1888, and where Carl was still living during the period of WW1.

The missing link is the family of Frederick Biber and Anna Stein, i.e.their children - the siblings of Aunt Johanna (Biber) Gottke - one of whom must be the father of Carl Heinrick Biber.
Knowles-1375 05:13, 8 January 2019 (UTC) 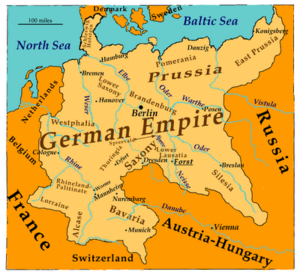 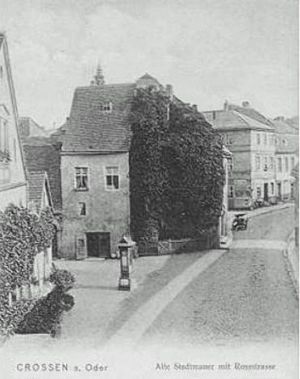 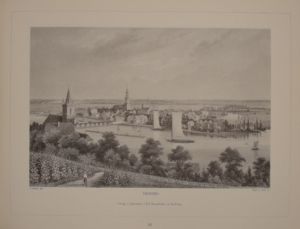 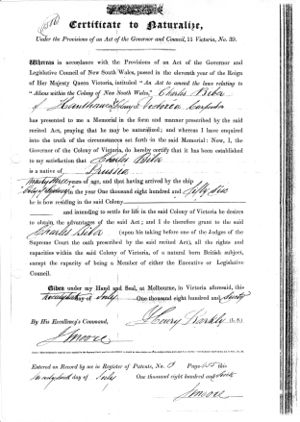 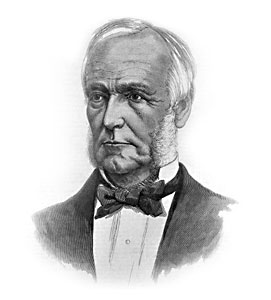