Adolph Biber
Born about 1838 in Prussia

Adolph was born in Prussia about 1838. He migrated to America around 1863, settling firstly in New York, where he and his wife Stephanie had their first child, Ida.

In mid-1869, the family went West to settle in San Francisco, where three sons were born and raised.

Adolph was a watchmaker by trade and he established a business (at 329 Kearny Street) in San Francisco, and the family lived at 173 Clara Street for some years. (This area was later devastated in the earthquake and fires of 1904.) [1]

In the 1880 Federal Census, their eldest son, Arthur then aged 10, was shown as living with his uncle, Reinhold Biber in New Jersey. [2] Adolph's wife, Stephanie, was shown in California records in 1882 as widowed and employed as a governess in San Francisco.

Is Adolph your ancestor? Please don't go away!

ask our community of genealogists a question.
Sponsored Search by Ancestry.com
DNA
No known carriers of Adolph's DNA have taken a DNA test. 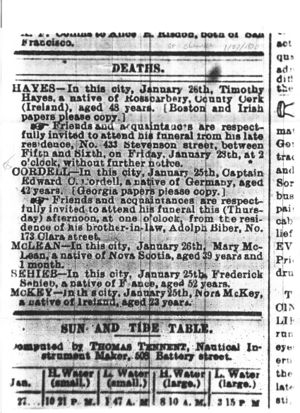