Moses Paquette (417-418) says, "Big Hawk is about sixty years of age [as of 1892]. He is a descendant of the famous chief Kayrahmaunee (Walking Turtle). He is a young-looking, finely-formed Indian, some five feet ten inches in height, with small mustaches; he is sober, of good habits, and with a high sense of honor, and by those who stand by him is looked up to with much admiration. He has a regular homestead of forty acres on Pike lake, in Marathon county, a portion of which he cultivates, eking out an existence by hunting. During the removal of 1873, Captain Hunt took Big Hawk in shackles to Nebraska, because the chief declined to go unless forced. But the other members of his band made up a purse and soon brought him back to Pike lake."

Moses Paquette (412-415) describes an incident that made Big Hawk famous: "In 1873, there was another attempt to move the Winnebagoes from the state. Capt. Charles A. Hunt, of Melvina, Monroe county, was awarded the contract for removal. There were then about a thousand of the tribe in Wisconsin, scattered quite generally along the water-courses leading into the Wisconsin and the Mississippi south of the Black (413) river and Wausau. ... Big Hawk was one of the chiefs among those Winnebagoes who stoutly refused to go, so it was determined to make an example of him. Big Hawk and some twenty-five or thirty others were holding a feast on the Baraboo river, three or four miles southeast of Portage. The military surprised the party, surrounded the camp, took away the arms of the Indians, and ordered them to march into Portage. They refused, whereupon Hunt went around among them and clapped handcuffs upon Big Hawk, who made no resistance. The prisoners were then marched into town, surrounded by the military. It was in December, and the roads none of the best. I saw them marched into Portage and put aboard the cars, amid considerable popular excitement, and shipped on to Sparta. ... There came to be much popular indignation over the manner in which this futile attempt was carried out, and since that day there has been no serious attempt to disturb the Wisconsin Winnebagoes, who have so (415) persistently clung to their native woods and streams, despite the advance of civilization around them."

Big Hawk and his band returned to Wisconsin. They only appear in one census, and they were almost missed in that one, as Moses Paquette relates (416-417): "I helped take the Winnebago census in 1881... Our habit was to send out runners among the Indians and invite them to come in wherever our office was established. ... About eight hundred came in readily enough, but there were some two hundred and fifty, chiefly belonging to Big Hawk's band, at Pike lake, who refused to be counted. It seems that H. W. Lee, a Stevens Point lawyer, asserted that the Winnebagoes owed him ten thousand dollars as attorney fees. He set up the claim that during the eight years previous to 1881 he had been of great service to the tribe and had gone to Washington several times in their behalf; that, in fact, he was the cause of getting the act of March 3, 1873, passed for the relief of the Winnebagoes. This act provided for regular annual payments, although they did not, for various reasons, commence until ten years later. Lee persuaded Big Hawk and his followers to refuse enrollment until a promise should be extracted from the government that he (Lee) should be reimbursed out of the payments which were to succeed the taking of the census. ... The money had been accumulating since 1873, so there was now some forty thousand dollars to distribute among the Indians who were on the roll. Big Hawk's people refused their money at the Stevens Point payment, and indeed they have ever since declined to have anything to do with it, and all on account of Lee's claim, which they honestly believe to be a just one. But the band has fast decreased in numbers, as the temptation of the accumulating money becomes stronger, and the influence of the payment Indians — who think Big Hawk a foolish man — predominates. There are now left of his party but twenty-five or thirty persons, — Big Hawk himself, and some of the Snake family. Some of this band, who have come in lately, have received as high as nine hundred dollars per head, and one of those who still hangs out (Two Crows) would get twelve hundred and twenty dollars if he would but consent to draw it. Whatever may be said of Lee's claim, it certainly indicates a strong sense of personal honor in Big Hawk and his companions, that, sincerely believing in the demand, they are willing to sacrifice so much for a nice question of moral principle."

Is Kerejųxetega your ancestor? Please don't go away!

ask our community of genealogists a question.
Sponsored Search by Ancestry.com
DNA
No known carriers of Kerejųxetega's DNA have taken a DNA test. 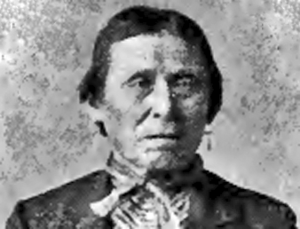