Hugh was the son and main heir of Roger le Bigod and Ida de Toeni.[1][2][3] His birth date is uncertain but his parents married around Christmas 1181,[4][5] so a guesstimate of about 1185 may not be unreasonable.

In 1215 Hugh and his father joined in the baronial unrest which led to the signing of the Magna Carta, of which they were both Surety Barons.[1][2]

In December 1215 Hugh was excommunicated, alongside his father and others, for his part in rebellion against King John. Hugh and Roger remained in rebellion until September 1217.[6]

In 1221 Roger le Bigod died. Hugh paid homage for his father's lands on 2 August 1221, and became 5th Earl of Norfolk overall,[1][2] and 3rd of the second creation.[3] Hugh also inherited the positions of Steward of the royal household and warden of Romford Forest, Essex.[1][2]

In 1222 Hugh was granted the right to hold a market at Dovercourt, Essex.[3]

In 1223 he took part in a campaign against Llewelyn of Wales.[3]

Hugh died before 18 February 1224-5,[3] within days of his witnessing the Magna Carta confirmation. His wife survived him, going on to marry William de Warenne, one of the Illustrious Men listed as King John's advisers in the Magna Carta.[1][2]

Per pale Gules and Azure, a lion rampant ermine, as recorded during the signing of Magna Charta.[8][9]

"Roger was joined in his rebellion by his son and heir Hugh, who was already of full age, and the two stood in the forefront of the opposition in East Anglia. In March 1216 the king succeeded in taking the family’s main castle at Framlingham and put pressure on the earl by pardoning those of his followers whom he captured, while condemning those who refused to submit to forfeiture of their lands. Roger and Hugh did not return to their allegiance until after the general peace settlement agreed with Henry III’s Minority government at Kingston-on-Thames in September 1217. By April of the following year the earl had received back all his lands and titles, but, by now over 70, he was in semi-retirement and he died three years later in 1221. He was succeeded as earl by his son, another of the Twenty Five, who in 1206 or 1207 had married Matilda, daughter of the future Regent, William Marshal, earl of Pembroke. The son died in February 1225."

Blomefield's Topographical History of Norfolk suggests that Hugh was "said" to have had a son Simon, but gives no evidence for this.[10] There is no support for the relationship in Cokayne's Complete Peerage or other reliable sources more recent than Blomefield.[1][2]

John Bigod has previously been shown on WikiTree as a son of Hugh. John's profile has no good sourcing, and he may never have existed.

Daughter said on Wikipedia to have married William Devereux

Wikipedia's own article on Hugh Bigod lists no daughter who married William Devereux.[8]

Hugh le Bigod is a Magna Carta surety baron and has the Magna Carta Project as a manager.

See Bigod-1 Descendants for profiles of his descendants that have been improved and categorized by the Magna Carta project and are in a project-approved trail to a Gateway Ancestor. See this index for links to other surety barons and category pages for their descendants. See the project's Base Camp for more information about Magna Carta trails.

Sponsored Search by Ancestry.com
DNA
No known carriers of Hugh's DNA have taken a DNA test. 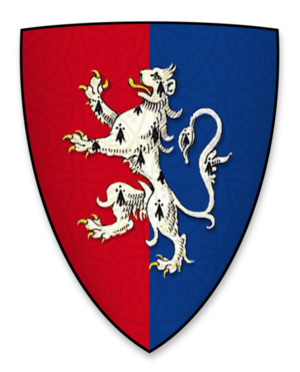 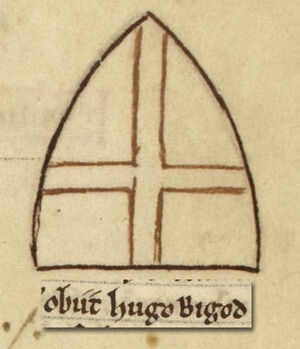 Scott Hutchins
I have a Bigod on my tree who is my 24th great-grandmother with William Devereaux (1219-1265). I do not have her first name, her dates, or her parentage. I'm wondering if there is a connection.
posted Jun 06, 2021 by Scott Hutchins

Liz (Noland) Shifflett
I didn't see a Bigod wife for William (Devereux) d'Evreux (abt.1219-1265), but he has a connection (not a relationship) to Hugh - see https://www.wikitree.com/index.php?title=Special:Connection&action=connect&person1Name=Devereux-40&person2Name=Bigod-1&relation=0&ignoreIds=
posted Jun 06, 2021 by Liz (Noland) Shifflett

Darlene (Athey) Athey-Hill
According to Wikipedia (https://en.wikipedia.org/wiki/William_Devereux_(1219%E2%80%931265) ), William Devereux was first married to a daughter of Hugh and Maud and they had several children. After her death, William married Maud Giffard. You would need to review the sources, since none of the sources for Hugh Bigod indicate (to the best of my knowledge) a daughter that married William Devereux.
posted Jun 06, 2021 by Darlene (Athey) Athey-Hill

Michael Cayley
The sourcing on Wikipedia for William Devereux marrying a daughter of Hugh Bigod looks weak. It appears to be just one source, an edition of a Welsh Assize Roll, which, as I read it, actually does not support the relationship. Whoever wrote this part of the Wikipedia article has, I believe, misread what is in the book. It is viewable on Familysearch at https://www.familysearch.org/library/books/records/item/545120-the-welsh-assize-roll-1277-1284-assize-roll-no-1147-public-record-office?viewer=1&offset=0#page=1&viewer=picture&o=&n=0&q=: go to p. 341.

Cokayne names only Isabel as a daughter of Hugh and Maud in a footnote which reads as if it is intended to mention all the known children apart from the oldest son who is named in the main text. Cokayne, Complete Peerage, revised edition, Vol. IX, p. 590, footnote c.

Unless good sourcing can be found, the suggestion that William Devereux married a daughter of Hugh Bigod should be regarded with considerable caution. I have added a warning marker to William Devereux's profile.

Michael Cayley
Just to add that Wikipedia's own article on Hugh Bigod does not mention any daughter who married William Devereux. See https://en.wikipedia.org/wiki/Hugh_Bigod,_3rd_Earl_of_Norfolk.
posted Jun 06, 2021 by Michael Cayley

Joe Cochoit
Tim, methods of counting can vary which leads to confusion. This is especially difficult in very early creations of a title. You can say he was the 3rd earl of the 3rd creation of the title, or that he was the 5th earl of Norfolk overall. In this case actually, it is clear the the old title was settled on his grandfather (3rd earl) by Henry II so it was not a true new creation as we think of it in modern terms. As a way of standardizing such things, we follow Complete Peerage as the definitive source which makes this Hugh Bigod the 5th earl.
posted Apr 14, 2018 by Joe Cochoit

April (Dellinger) Dauenhauer
Good catch, Liz. The "III" should be removed from this Hugh le Bigod.

Looking in Royal Ancestry, Vol I, under Bigod starting on page 362, I can't even find any Hugh the third - (this Hugh's father is Roger). This Hugh le Bigod had a son Hugh BUT that son did not have a son Hugh (who would have been Hugh III, but no such person).

April (Dellinger) Dauenhauer
The Comment by Chase Ashley regarding the use of "Sir" motivated me to look up Hugh le Bigod's biography in Richardson's Royal Ancestry, Vol I, page 364. Hugh le Bigod is written by Douglas Richardson without the honorific of SIR, as:

Hugh's son also named Hugh is written by Richardson with the honorific "SIR". A survey of other lords shows some with, others without.

Fletcher Trice
I rather like this point. Perhaps the same discussion could be explored about the prefix "Lady". However, I rather like to add that honorific to a female profile as I think it's deserved no matter the reason.

On another tack, I'm thinking it's the Buhun line where the 4th or 5th Lord made the King very mad and had his properties taken away. Thus he never became the 4th or 5th Lord though numerous scribes and historians play loose with that point for some reason. Fortnately for that family, the heir resumed the titles, but what was his proper number?

Joe Cochoit
Fletcher, methods of counting can vary which leads to confusion. This is especially difficult in very early creations of a title. You can say he was the 3rd earl of the 3rd creation of the title, or that he was the 5th earl of Norfolk overall. In this case actually, it is clear the the old title was settled on his grandfather (3rd earl) by Henry II so it was not a true new creation as we think of it in modern terms. As a way of standardizing such things, we follow Complete Peerage as the definitive source which makes this Hugh Bigod the 5th earl.

I really dislike the prefix "Lady" and will often delete it. It is much more of a (relatively) modern thing than a medieval thing, especially in this time period. It also tends to get applied to many people inappropriately. Go through all the IPMs, close rolls, patent rolls, fine rolls, etc. and I don't think you will find many, if any, examples of a prefix being used in this form.

posted Jul 30, 2021 by Joe Cochoit
[Living Schmeeckle]
Deborah, Martha (Yonge) Moore is not a gateway ancestor. The problem is with her father's false father. George Young-3414, b. 1517 in Shropshire, was NOT the father of Christopher Yonges-9, b. 1575(!) in faraway Suffolk. That link should be detached.
posted Jun 03, 2016 by [Living Schmeeckle]

Deborah (Hoffman) Weiner
In reference to the previous message:

Martha (Yonge) Moore's ID # is Yonges-8, not Yonge-8. The relationship link to Hugh Bigod is through Hugh's daughter Isabel. Thank you.