Roger was the 4th earl of Norfolk overall, and the 2nd of the second creation.[1]

Roger stayed loyal to Henry II when three of Henry's sons rebelled in 1173-4[1], while his father sided with the rebels. In the Battle of Fornham (October 1174) Roger fought on the side of the king, and his father was with the opposing forces.[4]

Roger's father Hugh repudiated his mother and remarried, his second wife being Gundred. When Hugh died in 1177, Gundred lodged a claim to Bigod lands. An appeal was made to Henry II, who used the opportunity to take the disputed lands into royal possession.[2][4] Some of the lands held by his father were restored to Roger in 1182[1] but it was not until the accession of Richard I that Roger was confirmed as Earl of Norfolk and hereditary Steward of the the king's household.[2][4] Inheritance difficulties with his half-brother Hugh dragged on until 1199, when a dispute over lands worth £30 a year was finally settled.[4]

In 1189 Roger was present at the coronation of Richard I.[1] Roger's fortunes soon improved. That year he served as ambassador to Philippe-Auguste of France in connection with arrangements for the Third Crusade.[1][2] In 1191 Hereford Castle was entrusted to him.[2] From 1191 he served as a judge both at Westminster and on eyre circuit.[1] In 1193 he took part in negotiations for the release of Richard I from captivity in Germany.[1][2] When Richard I was crowned for a second time in 1194, Roger was one of four earls who held a silk canopy over the king's head - a sign of favour.[2][4] From 1194 to 1196 he was a Baron of the Exchequer.[4] In 1197 he was Chief Judge in the royal court.[2]

Around this time Roger began rebuilding the Bigod castle at Framlingham, Suffolk, which Henry II had destroyed in 1176.[4]

Roger attended the coronation of King John in 1199.[1][4] He continued in royal favour in the first decade of John's reign. In 1200 he was made Warden of Romford Forest.[2] That year he was one of the barons who escorted the King of Scotland when he came to pay homage to King John for his English lands.[1][2][4]

Roger is recorded as accompanying King John to Normandy in 1200, and taking part in campaigns in Poitou, Scotland, Ireland and Wales.[4]

In 1211 he negotiated a lifetime respite for the payment of scutage on his extensive landholdings, and a reduction in future payments.[4] But in 1213 he appears to have suffered a brief period of custody for reasons which are not known.[2] That same year he headed a commission appointed to investigate an ecclesiastical dispute in the Diocese of Ely.[4]

In 1214 Roger went with King John to Poitou.[2] But the following year he joined in the baronial unrest which led to the Magna Carta, of which he was one of the Surety Barons.[1][2][4] During the subsequent rebellion, Roger was excommunicated and his lands were made forfeit[1][2][4], and in 1216 his castle at Framlingham was captured by the royalist forces.[4]

Roger finally returned to royal allegiance in 1217, and his lands were restored.[1][2][4] He appears to have retired largely from active life - he was into old age - as his name hardly features in subsequent State records.[4]

Roger held extensive lands spread across a number of counties.[2] In 1211, when he compounded with King John over scuttle, they amounted to some 160 knights' fees.[4], when his son Hugh came into his inheritance.[1] His inheritance from his father included the Barony of Framlingham.[6]

"The Bigods were a major East Anglian landowning family, based at Framlingham (Suffolk), who had held the earldom of Norfolk since its grant to Hugh Bigod in 1140 or 1141. Roger (c. 1143-1221) was the only son of this Hugh by his first wife, Juliana, sister of Aubrey de Vere, earl of Oxford.

"Roger’s father had left him a tangled inheritance. He had repudiated his son’s mother and had subsequently married Gundreda, daughter of Roger, earl of Warwick, by whom he had two more sons, Hugh and William, for whom their mother, after their father’s death in 1176 or 1177, sought to make provision out of the family inheritance at their elder half-brother’s expense. Henry II, savouring the opportunity to gain his revenge on Hugh for his involvement in the rebellion against him in 1173-4, deliberately left the case unresolved, refused to allow the son to succeed to the father’s earldom, and confiscated the lands in dispute between the heir and the half-blood. Roger was only able to vindicate his rights on Richard I’s accession in 1189, when the earldom was granted to him on payment of the relatively low relief of one thousand marks (£666).

"Thereafter Roger enjoyed a long and honourable career in royal service. He served Richard as a justice in eyre (i.e. itinerant judge) and as a baron of the exchequer. In John’s reign he took part in the defence of Normandy, and after 1206 served on campaigns in Poitou and within the British Isles. In 1215, however, he went over to the opposition, joining the rebel barons in their muster at Stamford. In part, his involvement on the rebel arose in response to the financial pressures exerted on him by the king. The scutage – money due in lieu of personal military service – that the earl owed from his many estates was so substantial that in 1211 he was driven to striking a deal with the exchequer to pay 2000 marks (£1333) for respite during his lifetime from demands for arrears and for liability to a reduced sum in future. Roger had various other grievances against the king. One at least related to litigation. In 1207, when a legal action had been brought against him in the royal courts, he objected to the chosen jurors on grounds of their likely bias, but his arguments had been ignored by the king, who ordered the case to proceed.

"Roger was joined in his rebellion by his son and heir Hugh, who was already of full age, and the two stood in the forefront of the opposition in East Anglia. In March 1216 the king succeeded in taking the family’s main castle at Framlingham and put pressure on the earl by pardoning those of his followers whom he captured, while condemning those who refused to submit to forfeiture of their lands. Roger and Hugh did not return to their allegiance until after the general peace settlement agreed with Henry III’s Minority government at Kingston-on-Thames in September 1217. By April of the following year the earl had received back all his lands and titles, but, by now over 70, he was in semi-retirement and he died three years later in 1221. He was succeeded as earl by his son, another of the Twenty Five, who in 1206 or 1207 had married Matilda, daughter of the future Regent, William Marshal, earl of Pembroke. The son died in February 1225."

Medlands names a further daughter, Basilia, citing the Liber Vitae of Durham.[5] The first edition of this also appears to name further children, G G Dapifer and Henricus Capellanus. These three names were added in an empty space between a Bigod entry and the end of a page, and almost certainly not intended to represent children of Roger. There was a 2002 thread about this in soc.genealogy.medieval.[8]

This profile was revised for the Magna Carta Project by Michael Cayley in December 2019. 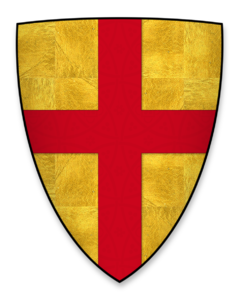 Darlene (Athey) Athey-Hill
Will someone look in Richardson's books (mine are home in Canada) referenced and let us know if there is any mention of son Ralph? Roger's profile is linking to Ralph with four references shown. I checked FMG and didn't see a mention of a son Ralph. Trying to figure out if there is a reliable source for Ralph's existence. Thanks.
posted Dec 28, 2020 by Darlene (Athey) Athey-Hill

Michael Cayley
Thanks, Malcolm. Son Ralph's profile is effectively totally unsourced, and needs research, and the bio contains no real info whatsoever. It will be going at some point on the hugely long todo list for the new Medieval Project which already contains well over a thousand profiles that need a lot of attention from the limited number of people who have the certification to work on pre-1500 profiles. But obviously the birth date needs adjusting to before the mother's death and I have seen to that.

I see you are fairly new to WikiTree. You will find that there are a very large number of medieval profiles that are in a similar state to that of Ralph, with no good sourcing and often with wrong or dubious dates, and some with wrong or dubious relationships. They mostly stem from some years in the past before WikiTree stopped the import of GEDCOM info for early profiles and tightened up on who could work on pre-1500 people and sourcing requirements for medievals. This is a very big problem, and one major motive behind the launch of the Medieval Project this summer. Serious medieval research takes time, and it will take a long long time to address this big general problem on WikiTree.

Clare Bromley III
The url of Hugh in this sentence above goes to Isaac Bigod in the 1800's. "Birth and Parentage

Roger Bigod was the son of Hugh Bigod, 3rd Earl of Norfolk, and Juliana de Vere,"

Liz (Noland) Shifflett
there is no wikitree profile for Isaac Bigod. I've clicked on all the links, and can't figure out what you mean. Could you give the URL & also post a copy of the sentence that it's in?

Michael Cayley
I have now finished what I currently intend on this profile. If anyone spots any slips or typos, please either correct them or message me. Thanks!
posted Dec 16, 2019 by Michael Cayley

Say... what is going on here with 2nd vs 4th Earl? I see comments below and self-contradictions in the Bio notes. Are we going to fix them, or are we happy with the way things are now?

Of course, I understand debates about numbering-- lot of confusing examples. Is this one?

Currently, we seem to be asserting:

Given the father of this Roger Bigod-2 is Hugh Bigod-7, 1st Earl of the second creation... and the earlier first creation was forfeit 1074, then lapsed for 20 years... it's not clear how we justify calling this guy 4.

posted Mar 25, 2019 by Isaac Taylor
C (Gervais) Anonymous
Quoted from this comment thread: "Moved birthdate forward to 1140 consistent with Richardson."... Perhaps that is where the issues are stemming from.
posted Jan 09, 2019 by C (Gervais) Anonymous
Joe Cochoit
You are looking at the wrong Roger Bigod. Roger Bigod and Adelisa de Toeni were the grandparents of this Roger.

Medlands actually names the wife of this Roger as Ida unknown. The identity of "Countess Ida" had been for decades been one the great genealogical mysteries with many theories. Only recently has her identity been proven. Please see the numerous discussions on soc.genealogy.medieval. Also Ray Phair, "William Longespée, Ralph Bigod, and Countess Ida" [The American Genealogist, vol. 77, pp. 279-281].