"Black Wolf" in Hocąk is Šųkjąksépka, which is from šųkjąk, "wolf" (< šųk, "canine, dog" and jąk, cąk, a superlative); sep, "black, dark"; and -ka, a definite article suffix used in personal names. The name is usually associated with the Wolf Clan. However, Lurie remarks (Check List, 57, #22), "Although the name may also be found in the Wolf Clan, this individual is recalled as a member of the Bear Clan." Proof of this may be seen in the name of his son, Mąną́pĕnįka, "Little Soldier," soldiers being the mąną́pĕ or police, whose office was the exclusive function of the Bear Clan. The Wolf and Bear were friendship clans.

Spoon Decorah said, “Black Wolf was the uncle of Gray Eagle’s Eye, my present squaw; Dandy was her cousin …” (Narrative, 451-452)

Juliette Kinzie in her Wau Bun (73-74) says, "There was Black-Wolf, whose lowering, surly face was well described by his name. The fierce expression of his countenance was greatly heightened by the masses of heavy black hair hanging round it, quite contrary to the usual fashion among the Winnebagoes. They, for the most part, remove a portion of their hair, the remainder of which is drawn to the back of the head, clubbed and ornamented with beads, ribbons, cock's feathers, or, if they are so entitled, an eagle's feather for every scalp taken from an enemy."

Black Wolf was a large man and rose to the rank of War Chief. He fought on the side of the British and was at Mackinac and Prairie du Chien in the War of 1812. (Lawson, 66) He was one of four chiefs, accompanied by 40 warriors who appeared in the peace negotiations between the British and Americans at Mackinac on June 3, 1815. (Papers, 142)

Is Šųkjąksépka your ancestor? Please don't go away!

ask our community of genealogists a question.
Sponsored Search by Ancestry.com
DNA
No known carriers of Šųkjąksépka's DNA have taken a DNA test. 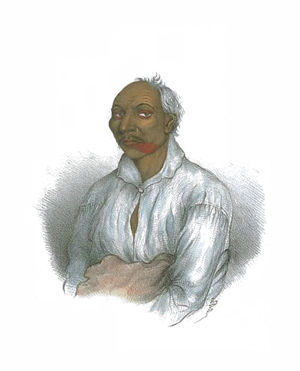