Nojumbka is for Nojųpka (variant Nojǫpka), from no, an old form of ną, "tree"; jųp, "lightning"; and -ka, a definite article used in personal names. So the name, a Thunderbird Clan name, is literally, "Tree-Lightning."

In the 1910 Federal census and the 1911 Indian census at Tomah, Wisconsin, he has the birth order name HaGahKah, for Hagága, "Third Born Male."

“The sons of Wanknaroskaka or James Blackhawk were Nojumbka, meaning The thunder who strikes the tree or John Blackhawk and Wakjagohoyka, (Returning with victory), Albert Blackhawk, died July 1912, at age 20. The daughters are Chimkananewinka (She who goes on the village) born 1875 married Edwin Greengrass; Ahosojwaywinka (She whose feathers are worn) born 1881, married Arthur Cas[si]man, and Wakanjapinwinka (The good thunder woman), born 1886, married Charles Greengrass and lives at Trempealeau, Wisconsin.” (Jipson, 241)

His WWI draft card describes him as having black hair, brown eyes, and being tall and slender in build. Van Schaick made a photographic portrait of him around 1904.

"An Indian Chief's war bundle — one of the few owned by museums in the country — was recently given to the Wisconsin State Historical museum, by John Blackhawk, of Greenwood, Wisconsin, great grandson of "Winnebago Blackhawk," an Indian chief of the Mississippi River Valley tribes. Most of these bundles are kept in the possession of the family and are handed down from generation to generation. The entire bundle is wrapped first in matting and then in skin and is worth about $200. It contains several ermine, the sacred animal of that tribe, medicine, herbs of various kinds, charcoal tied in a skin bag, three war clubs, several flutes, fire-hearths and dagger sheath. The only other bundle of this kind that is in the Wisconsin Museum at the present time belongs to the same tribe but to a different clan." (Owen Enterprise)

Barge described John as, "an intelligent and well-educated Winnebago." (Barge, 29) Not surprisingly, therefore, he has a number of academic contributions.

1927 — contributed the following account from his family history of the 1863 removal from Crow Creek Reservation:

There are some few survivors of the band of that time still living,
who went through those terrible days and shudder at the thought
of them, when they were the helpless prey of the ruffian soldiers.
Women and girls raped, men murdered, and all subjected to every
insult and indignity that brutal men could invent. These outrageous
things were inflicted upon the hapless victims for no other crime
whatever except that they had been unfortunate enough to be born
Indians. (Hughes, 179 = van Schaick, 19)

John died in 1951, and is buried in the Decorah Cemetery, Black River Falls, Jackson County, Wisconsin, USA. (Find a Grave) 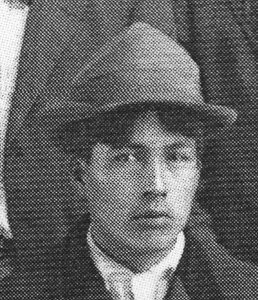