The November 1905 census records that Mrs. Greengrass is 31 years of age which implies a birth date of 1874/5.

The name Chimkananewinka can be understood to be Cinągᵋrarewįga. The letter /m/ is a misreading of /na/; and the /r/ in HoChunk is often confused with /n/. Cinągᵋrarewįga is from cinągᵋra, "the village" (< cinąk, "village", and -ra, the definite article); re, "to go, she goes"; -wį-, an infix indicating feminine gender; and -ga, a definite article suffix used in personal names. Jipson's "She Who Goes on[to] the Village," is a fair translation.

The 1905 census gives her name as Che Nunk Mon E Win Kah, which is for Cinągᵋmąnįwįga. This is synonymous with the name Cinągᵋrarewįga, and means, "Village Walker," or "She Walks on Village." Use of synonymous names has been attested elsewhere.

“The sons of Wanknaroskaka or James Blackhawk were Nojumbka, meaning The thunder who strikes the tree or John Blackhawk and Wakjagohoyka, (Returning with victory), Albert Blackhawk, died July 1912, at age 20. The daughters are Chimkananewinka (She who goes on the village) born 1875 married Edwin Greengrass; Ahosojwaywinka (She whose feathers are worn) born 1881, married Arthur Cas_man, and Wakanjapinwinka (The good thunder woman), born 1886, married Charles Greengrass and lives at Trempealeau, Wisconsin.” (Jipson, 241) The censuses confirm her marriage to Ed Greengrass.

Is Jennie your ancestor? Please don't go away!

ask our community of genealogists a question.
Sponsored Search by Ancestry.com
DNA
No known carriers of Jennie's DNA have taken a DNA test. 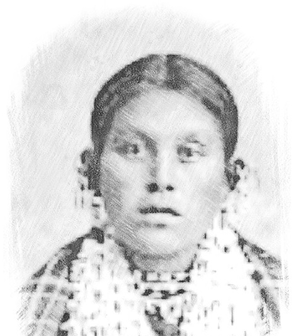