Like most phonetically rendered names, Sayokoruspinki is a bit distorted. However, it is still easily recognizable in Si-ok’uruspįga, "Leaving Good Footprints," a personal name in the Bird Clan. (Radin) Reuben StCyr gave J. O. Dorsey the word sihokúrus for "footprint." (Dorsey) This can be further analyzed as, si, "foot"; hok’ų, "to give"; and rus, "to take, accept" – giving us, sihok’ųrus, "receiver of what the foot gives." The phonemes /iho/ in a compound will resolve to /io/, /iyo/ or /yo/. So the proper form of the name can be rendered as, Siok’ųruspįga, "Good Footprints."

He also went by the name Kerejųsepka, listed by Radin as a name in the Bird Clan (Upper Moiety). Lurie, more specifically, lists him as a member of the Hawk Clan (Warrior Clan). (Lurie, 61, #44)

"The lineage of the Blackhawk family, as given by John Blackhawk, is as follows: First, Chiakamanika (He who goes on the village), wife unknown. Second, his son, Naxi-karajusaip-ka (Fourth son, Blackhawk). Third, his son, Sayokoruspinki (Acceptance of sacrificial moccasins), Thomas Blackhawk, who died in 1899 aged ninety-five (near Black River Falls). His daughter, Henuka (First girl) married Kaxinopaka or Two Crow, and she lived to the age of one hundered. She died in Winona, Minnesota in 1904." (Jipson, 241)

Sayokoruspinka and his wife, Peneeka (Beautiful) had Wanknaroskaka (Man of Distinction) born about 1847, known as James Blackhawk, died in the autumn of 1929. He married Winaneka (Second corn) daughter of Chief Winneshiek (Coming Thunder). The daughter of Sayokoruspinka born about 1842 was called Karayjusaipwinka, meaning Blackhawk woman. She married James Mallory.” (Jipson 241)

Black Hawk had a second family with his wife Red Hair Woman, a son David, and a second son Daniel, both of which appear to have died young. (1888 census)

We learn from his brother Walking Cloud (Mąxíwimą̀nįga):

During the Black Hawk War, my father had his lodge near La Crosse. I did not go to the war; I was too young. But my brother did. His name was Secoroouspinka [Sikuruspįga]. General Dodge sent a messenger down to Prairie du Chien, and said he wanted the Winnebagoes to go into the war and help the Great Father punish the Sacs. Our people, who were named in this call, did not want to go to war. But the messenger, after we had all arrived in Prairie du Chien, picked out Winnebago Black Hawk (my father), and my brother, and they went up the Wisconsin River with a party of white soldiers and officers from Fort Crawford. They met a number of Sacs coming down on a raft made of canoes tied together. The Winnebagoes and the white killed most of the Sacs in this party. Winnebago Black Hawk was the guide of this expedition. (Narrative, 463-464)

His obituary reads, "Black Hawk, the most noted chief of the Wisconsin Winnebago Indians, age 90, died in the town of Brockway, a few miles from Black River Falls. The chief has been well known in the western part of Wisconsin. For the last 50 years, he was always a friend of the whites and on several occasions prevented the Winnebagos from taking the warpath to settle differences with the whites." (Clark County Press)

Images: 3
Blackhawk with a Peacepipe and the Grant Medal 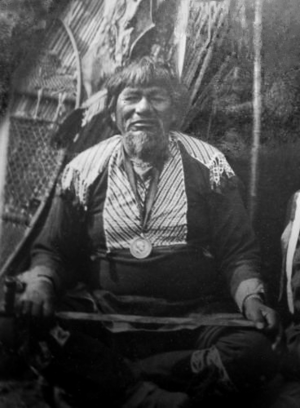 Thomas Blackhawk Seated by His Lodge 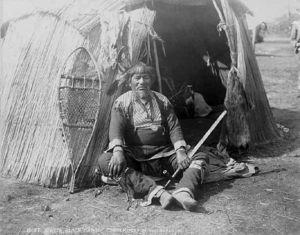 A Group in Regalia. Blackhawk is Seated at the Far Right. 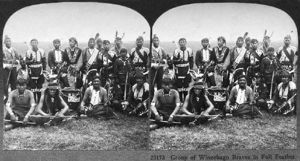