James Blakeman was born in 1624 in Stratford on Avon, Warwickshire, the child of Rev. Adam Blakeman and Jane Wheeler. About 1658, He married Ms. Stiles and they had three children together. His first wife died in 1666 and he married Miriam Blakeman on December 3, 1667. They had seven children together between 1668 and 1686.

James was a miller and settled after some years at Fairville, where he built a mill and where he died. His Will was dated at Oronoque, July 18, 1689, and proved November 17, 1689. He was buried in Stratford, CT.

-John Tod married Sarah Blackman 20 Aug 1677 (verified in town records)[5]
-Sarah Tod ye wife of John Tod died in Child bed the 16 day of December (& ye Infant a daughtr died som day before) 1688.[5]
-Sarah Blackman, daughter of James and Miriam Blakeman, was named in the 1689 (a year after the death of John Todd's wife) will of her father. She is called Sarah Cunny

Original data: Goodwin, Nathaniel. Genealogical Notes, or Contributions to the Family History of Some of the First Settlers of Connecticut and Massachusetts. New Orleans, LA, USA: L. Graham & Son, printers, 1899. 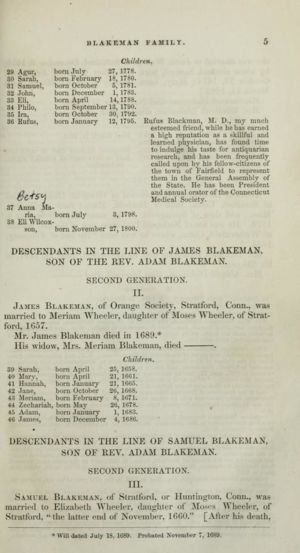 Chris Gilbert
Wildly inconsistent birth dates and locations in biography and death date does not match for Will/probate
posted May 13, 2021 by Chris Gilbert

Dan Ashton Jr
Yes, if according to the Blackman family document attached James and Miriam Stiles were married in 1657, combined with a baptism date of 1628 - James' birthdate can't be 1647. Can we please correct?
posted Aug 31, 2021 by Dan Ashton Jr

Anne B
Sarah Blakeman, daughter of James and his first wife, did not marry John Todd. See paragraphs in Children section.

I would be happy to take care of this. Any objections?