Reverend John M. Blackstone was born on January 16, 1781, in Natural Bridge Station, Virginia to James (Pope) Blackstone and Winifred Zachrey. (1) Pope Blackstone was born in approximately 1748 and was killed in the American Revolution in about 1780. (2) Reverend Blackstone married Catherine Harvey (b. March 8, 1872) on April 11, 1799, in Augusta, Richmond County, Georgia http://freepages.genealogy.rootsweb.ancestry.com/~union56/JBlackstone.htm

Note From my experience, a lot of times when two people who lived in the same area had the same name one used jr and one used sr even if they were not related. Or they used John of A or John of J etc... I don't know why Jr was used, maybe the census taker decided Jr should be added?

Elder John Martin Blackstone was an exceptional man, not only a preacher of the     Gospel, but a leader of men. He Migrated to Crawford County in 1822. His good       sense, quick perception, honesty and integrity soon won for him the confidence and esteem of all who knew him and placed him in the front rank as a representative man of his county.

He was a member of the first Inferior Court organized in Crawford County, as records   will show, and at the first election held in the county for Representatives to the Legislature or General Assembly, he was chosen as their Senator.  He was reelected annually for nine successive years.

While Elder Blackstone was faithful to the best interest of the State and County, he   was faithful to his obligation as a Minister of the Gospel. He helped organize several  churches, to wit: Mt. Paran, Salem, Mt. Carmel, Providence, Abilene and Union; also   Old Mt. Pisgah in Monroe, now Bibb County, later known as Calvery. He assisted in   the organization of the Echeconnee Association, of the Primitive Baptist Church and   was the first Moderator at Mt. Paran in 1825.

In 1925, Salem Church erected a monument in memory of Elder Blackstone and his   wife. Present day researchers are led to believe that he is buried in Salem Cemetery.  The truth is, John and his wife are buried in Mt. Paran Cemetery unmarked. We have   no positive proof , other than the fact that he and his wife were living with their          daughter and son-in-law, Nathan and Icy Fowler, who lived across the road from the   church. Records show that he was dismissed from the Church Roll the year of his      death. To those who knew him, he was deemed a "Remarkable Man" ( above material was extracted for the May issue of the Baptist Messenger in the      year 1887, and was written by his grandson, Zephaniah Fowler 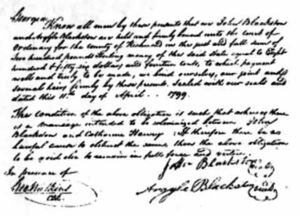 Please let me know any information you see to add or anything I do wrong. Thanks

Donnie Blackstone
Blackstone-506 and Blackstone-118 appear to represent the same person because: Everyone is saying these are the same the more I look I agree, I still would like to see a death certificate he was in Alabama some children born their, I will add children, what ever of my information you don't thank we need you can remove or i can look it over, sorry for all this trouble, Thanks..
posted Aug 25, 2017 by Donnie Blackstone