Note; for me to keep up with; As far as the Mary/Judith conundrum, I would guess they are the same people but it's only a guess. Dang nicknames always mess stuff up!! It would be great if we could find any other data on Judith but there doesn't seem to be any. Is there anyone in Charleston or thereabouts who can do an in person look up?

I don't know but interesting if she was in the Pendleton district;-->>https://www.ancestry.com/family-tree/person/tree/19599088/person/29565424702/facts >>https://www.wikitree.com/index.php?title=Blackstone-673&errcode=new_profile 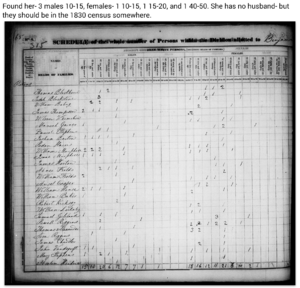 Donnie Blackstone
1819 they are a letter left at the South Carolina Post Office for Judith Blackstone can I get someone to Find this information and who sent it to her. Thanks
posted Jan 17, 2019 by Donnie Blackstone

Donnie Blackstone
People living close possible family members to Research any help on anyone I add, Thanks

Donnie Blackstone
I'm not sure if Judah was the wife or mother of any of the children she was just in the same area as John and Richard Blackstone in The Old Pendleton District of South Carolina
posted Feb 09, 2018 by Donnie Blackstone