In 1800s, women did not practice medicine. Elisabeth Blackwell brought about revolutionary change by becoming the first woman to earn a medical degree on 23 January 1849. She became the first woman doctor in the United States.

She began her training at the Geneva Medical College in New York. Viewed as an eccentric by townspeople and friends she lived in isolation. During the summer she worked for the Guardians of the Poor, a hospital and poorhouse in West Philadelphia, but she faced prejudice from many physicians.

Once she earned degree, she opened up a practice in New York City, but in terms of patient numbers, it wasn't initially successful. Then in 1853, she opened a small dispensary, New York Infirmary for Indigent Women and Children, close to Tompkins Square. A young German doctor, Marie Zakrzewska, who was also her protégé and her younger sister Emily, who had also become a doctor, supported her endeavors. As time passed, patient numbers increased and the institution began to train nurses as well.

Elizabeth's life was complicated by the Civil War due to her sympathies with abolitionists and personal support for the North. Male physicians from the United States Sanitary Commission threatened to not support the nurse education plan if Blackwell had anything to do with it. During this time, the New York Infirmary went ahead with the training facilities available for nurses with the help of the activist, Dorthea Dix.

In July 1869 Elizabeth returned to England, where she co-founded the National Health Society (1871) and promited social reform subjects close to her heart such as sexual purity, moral reform, women’s rights, preventive medicine, eugenics and medical education in several reform establishments. She believed Christian morality had an important role in medicine and that disease was often borne due to moral impurity. This led her to often prefer spiritual healing over materialistic ones.

She campaigned against prostitution, contraceptives and also against the Contagious Disease Act (1864), which permitted police officers to arrest prostitutes operating in ports and small towns> They would then be checked for sexually transmitted disease and if found to be found infected, would be imprisoned in a hospital which specialized in dealing with these type of patients.

She was a Conservative but differed with many women of the time, by stating she thought men and women have the same sentiments about sex, and it was up to both to control the outcome. Many women of that era believed that women did not have sentiments towards sex but that it was the task of the woman to instill the moral necessities for society.

Elizabeth never married and continued with her career late into her life. In 1895 she published her memoir, Pioneer Work in Opening the Medical Profession to Women, which sold only 500 volumes. She died on 31 May 1910 at her home in Hastings, England and is buried in the graveyard of St Munn’s Parish Church in Kilmun, Sotland.

Two years later, in 1849, Elizabeth Blackwell became the first woman to receive an M.D. degree from an American medical school. She worked in clinics in London and Paris for two years, and studied midwifery at La Maternité where she contracted "purulent opthalmia" from a young patient. When Blackwell lost sight in one eye, she returned to New York City in 1851, giving up her dream of becoming a surgeon.[3]

ask our community of genealogists a question.
Sponsored Search by Ancestry.com
DNA
No known carriers of Elizabeth's ancestors' DNA have taken a DNA test. 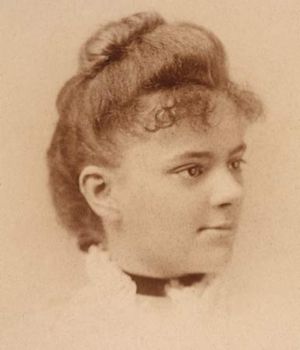 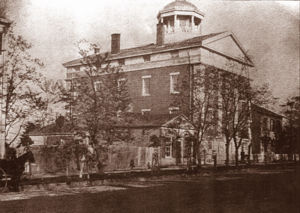 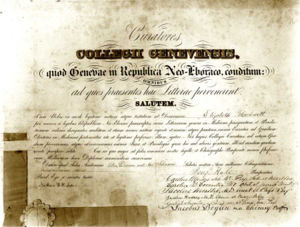 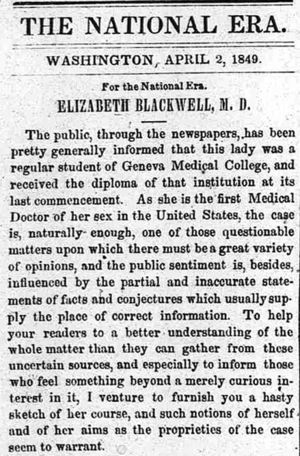