From about the age of 10, William studied at the drawing academy of Henry Pars where engraving was preferred to drawing. According to Essick, this appears to have been his first contact with any formal education.,[5] At age 12 he began to write original verse, some, later printed in the 'Poetical Sketches' (DNB, Vol.1-22, p.642). At age 14 he was apprenticed to the commercial engraver, James Basire, in the Strand,[6] who said his mind was simple not cunning like 2 otherapprentices[7], before entering the Royal Academy Schools as an engraver at the age of twenty-two.[8]

William married after 18 Aug 1782 (banns) at St Mary's Church, Battersea, Wandsworth, England to Catherine Butcher/Bucher, an impoverished grocer's daughter who could neither read nor write.[8][9][10]

Another source reports her name as Catherine Sophia Butcher.[11]

Blake taught Catherine, who was 5 years younger, to read and write and to use the printing press. Despite having no children, their marriage was successful. She was "one of the best wives that ever fell to the lot of a man of genius" (DNB, Vol.1-22, p.643), and they started married life at 23 Green Street, Leicester Fields, London, later to become Leicester Square.

In 1784 he opened he opened a printseller's shop in Broad Street in a partnership with a fellow engraver, Parker, while his youngest brother Robert lived with him and Catherine, but died in 1787, when they gave up the shop and moved to 28 Poland street.

Taylor, 2017, p.58 devotes half a paragraph to William Blake's state of consciousness as a poet, who "writes of being able to see "heaven in a wild flower" and "eternity in an hour"". Taylor terms it 'Natural Wakefulness', implying an absence of conscious spirituality in it's determination. William Blake called his own state of consciousness "Imaginative Vision". According to Richard Maurice Burke's Chapter 11 of his 1901 "Cosmic Consiousness"[12], which has an extensive discussion on Blake's personality, this points in so many ways to his having attained Cosmic Consciousness.

On the day of his death, he composed and uttered songs to his Maker so sweetly to the ear of his Catherine that when she stood to hear him he, looking upon her most affectionately, said: "My beloved, they are not mine—no, they are not mine!" He told her they would not be parted; he should always be about her to take care of her.

On his deathbed, Blake drew a picture of Catherine as his last work, stating "you have ever been an angel to me."[10].

Robert N. Essick, his biographer in the Oxford National Dictionary of National Biography states that William Blake died at 3 Fountain Court on the 12th August 1827. He quotes a contemporary reference, written 3 days after his death, stating that he died

died on Sunday Night at 6 O'clock in a most glorious manner[...]

The burial register entry for the dissenter's burial.grounds at Bunhill fields records his burial National Archives on 17 August 1827. [14][15][16]

Originally, he was buried in an unmarked grave. On the century of his death a stone was placed over his grave. This commemorated both William and his wife Catherine Sophia whose grave was 70 metres away so was rather ambiguously worded. The stone reads

NEAR BY LIE THE REMAINS OF THE POET PAINTER 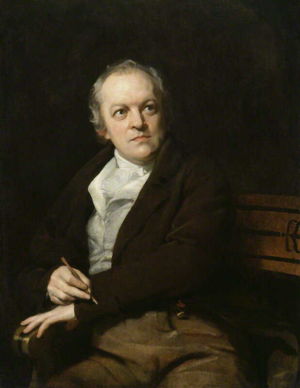