She married Walter Armstrong Ingalls. He was born in Scotland. They had four children: Emma, Caroline/Carolyn, Anna, Walter.

Walter served in Mass. Company A, Regiment 24 (Civil War). He was buried in Saugus. [2]

1890 Caroline was a widow with a pension. [9] Her son, Walter Jr, is noted for having a pension in the 1921 Congressional Record.

ask our community of genealogists a question.
Sponsored Search by Ancestry.com
DNA
No known carriers of Caroline's ancestors' DNA have taken a DNA test. 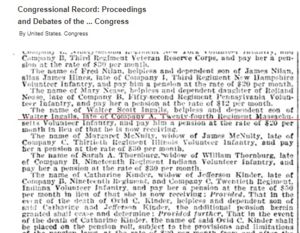