Cathrine Blanchan was the daughter of Mathieu and Magdalena (Joire) Blanchan. She was baptized December 26, 1637 in the Roman Catholic Church of Armentières, the city her mother's family had inhabited without interruption since at least 1507.[1] Today, Armentières is described as a "commune in the Nord departement in the Nord-Pas-de-Calais region in northern France." It is in the Lille arrondissement.[2] In her time, it was called "les Flandres francaises."

Her Huguenot family left France for England and then moved to Mannheim where she married Louis du Bois on October 10, 1655. She sailed with him to New Netherland in 1660, and he was the father of all of her children. After Louis died in 1696, she married Jean Cottin (Kingston, Ulster County, New York).

Our help is in the name of the Lord who made heaven and earth, Amen. I, Catherine Cottin being very sound of mind and memory and having for my husband Jean, Cottin, merchant living at Kingston in the County of Ulster, Province of New York, considering that the hour of death is unknown to all human creatures, and having recommended my soul to my creator, the omnipotent God and to my Savior and Redeemer and by the merit of His son Jesus Christ I believe I will be saved and have remission of my sins and hope for the resurrection of the Just by this virtue of the passion of our Lord Jesus Christ to attain the Kingdom of Heaven prepared by His Spirit, of my following words it is my Testament and my last Will for that which concerns the temporal goods which it has pleased my God by His Grace and Benediction to give me during all the time I have Lived and resided with my husband Jean Cottin (to the effect) that I would have the third part of the profit which God has given us together by his bounty, with my said husband Jean Cottin since the hour of our marriage up to the first trespass, therefore, I wish and it is my Will, very justly, that the franchise dated September 22, 1702, which I gave to Rachel, which is her name after having been baptized, shall be observed and shall be of full force and virtue from the first word of the page to the last word, and the said Rachel shall have and take after my death, my said third part of the profit, 30 pieces of Eight, and the other things which are stated in the said indenture, and she shall take before my children can divide my third part of the profit and also, I wish and it is my Will, being very just, that the indenture dated August 17, 1709, which I gave to our negress Dina shall be observed and guarded in full force and virtue, and also I wish and it is my very just Will that the donations dated March 10, 1697, which I made to my daughter Sarah for all my clothing, one chest, shall be oberved and guarded in full force and virtue. Also I give to the Walloon Church of Kingston, 20 pieces of Eight which to take after my death in my said third part of the profit and this to aid in assisting the poor, and for all that -which concerns my third part of the profit, it shall be to Abraham DuBois and Jacob DuBois and David DuBois and Matthew DuBois, and the two sons of Isaac DuBois, to them together I give them which they take after my death in mysaid third part of the profit, one fourth part, and to my said daughter I give to take after my death the two other fourth parts of my said third part of the profit to her alone, and for their inheritance of my said third part of the profit, all these children shall take in good merchandise and trade goods, each in proportion to their part, for this effect I have chosen my husband Jean Cottin whom I hereby constitute Executor of my present Testament and last Will who shall be bound by the above conditions and who shall render account six weeks after my death and deliver to each his part as is speci-. fied hereabove, and it is my last Will, and I have hereby signed, sealed, and delivered this present in my proper hand in presence of two witnesses, made at Kingston, July 23. 1712.

Catherine DuBois and her companions had been captives from June 19th to September 5, 1663. During all that time, nearly three months, they had been closely guarded at the fortress of the Indians, and held for ransome or exchange. The Indians were seeking to exchange the colonists for the return of some of their chiefs who had been sent to Curaçoa and sold as slaves by Governor Stuyvesant.[7]

Click the Changes tab to see edits to this profile; from that list, click WikiTree IDs other than Blanchan-1 to see changes to those profiles prior to being merged. Thank you to everyone who contributed to this profile.

Sponsored Search by Ancestry.com
DNA Connections
It may be possible to confirm family relationships with Catherine by comparing test results with other carriers of her mitochondrial DNA. However, there are no known mtDNA test-takers in her direct maternal line. It is likely that these autosomal DNA test-takers will share some percentage (beta) of DNA with Catherine: 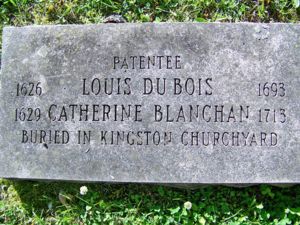 changes made to quoted matter and info from other sources - e.g., deletion/replacement of part of location cited as from Monte Horton's article: was "Armentières, Lille, Flanders (now Nord)" now "Armentières, Flandres francaises (Nord), France", which is not what was in the article).

No sources given in the cited book that Anna Maria (du Bois) Hite was the daughter of Louis and Catherine (Blanchan) du Bois - and evidence that she could not be includes that she was born in 1684, married in Germany and immigrated in 1710. Louis and Cathrine immigrated much earlier & their 12 children are known (none named Anna Maria; none who married Hans Yost/John Jost Hite). In addition, Catherine's 1712 will does not mention a daughter named Anna.

Liz (Noland) Shifflett
thank you for your note that said the book is available in FamilySearch.org: https://dcms.lds.org/delivery/DeliveryManagerServlet?dps_pid=IE220466

I found where it shows that Anne Marie is a daughter of Louis du Bois & Catherine Blanchan, but I found no sources for the information. I'll disconnect Anne Marie before merging this duplicate for Catherine with the established, sourced profile.

Liz (Noland) Shifflett
Hi Misty! It appears you've created a few duplicate profiles (for Catherine & her husband's family). I set this profile in an unmerged match with Blanchan-1 because of the attached daugther(s). I have no record of an "Anne Marie DuBois". Could you give the source given by "OF WHOM I CAME; FROM WHENCE I CAME WELLS-WISE, RISH-WISE AND OTHERWISE"?