Robert Blasdell was born in Custer Township, Sanilac, Michigan on 31 Oct 1883[1]to Alfred Blasdell and Annie Smith. At the age of 25, he married his only wife Elizabeth Cowell on 12 Apr 1909 in Speaker Township, Sanilac, Michigan,[2][3] at the Reorganized Church of Latter Day Saints. Eight years later he took employment with a relatively new company, the Interlake Steamship Co, as a Merchant Marine and worked for them for several years.[1]

Although he was never inducted into the military, he registered with the draft board on 12 Sep 1918 in Michigan.[1] However, he did serve as a Merchant Marine during the war.

Robert died on 27 Dec 1937 in Birchdale, Koochiching, Minnesota where he had bought land and moved his family after 1930 to try his hand at farming. After his death, his family moved back to Michigan and shipped the body to Sandusky, Sanilac, Michigan where he was buried in Greenwood Cemetery.[4][5] He left four children, his second oldest Edward William having died of pneumonia in 1920. 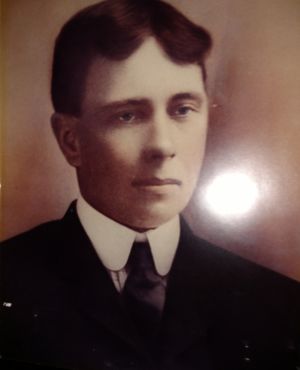