After several weeks of intense suffering, Mrs Lowe, wife of Mr Thomas Lowe, of ' Hilbury,' Carcoar, passed away early on Tuesday morning last, at the Carcoar District Hospital, at the age of 50 years. As previously reported in these columns, Mrs Lowe recently met with a serious accident, her hair being caught in a separator while the latter was in operation. From the effect of this, complications set in, and, although she obtained most skilful medical attention and nursing, it was unavailing, and she died from what is technically known as psendo leucæmia. Deceased was a native of this district, and had lived here all her life. Of the most kindly disposition, her generosity was proverbial, and a neighbor or a friend had but to ask and receive from her anything she was capable of giving. She leaves a husband and a large family to mourn their loss. The majority of the family is, fortunately, grown-up, six sons — Messrs. Edward, William, Norman, Douglas, John and Roy ; and four daughters, Mrs Kelly (Wellington), Blanche and Hilda. Other well- known and esteemed relatives in this district are Mr Geo. Blazley (brother) and Mrs Hubert Connolly (sister). The funeral, which took place on Wednesday afternoon, was very largely attended, visitors coming from all parts to pay their respects to the memory of an old friend. The body was taken to St Paul's Church of England, when Rev. L. A. Marina, in the presence of a very large congregation, conducted portion of the burial service. The cortege then moved to the cemetery, where the mortal remains were laid to rest, Rev. Mr Marina officiating at the graveside. The mortnary arrangements were capably carried out by Mr Cam Reed, of Carcoar.

ask our community of genealogists a question.
Sponsored Search by Ancestry.com
DNA
No known carriers of Martha's DNA have taken a DNA test. 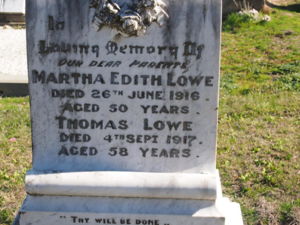